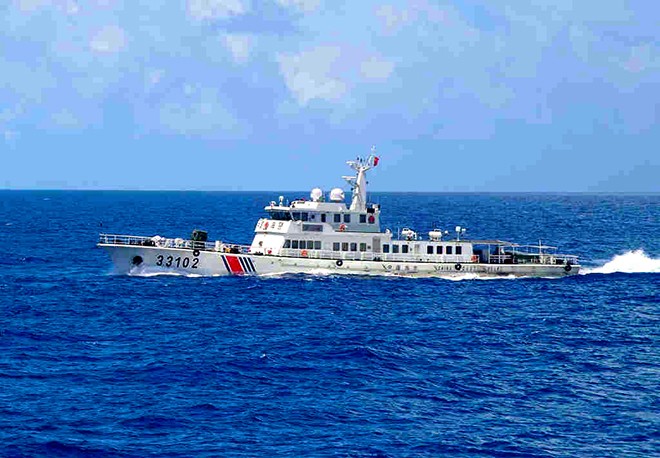 Emboldened by a law allowing wider weapons use, the Chinese Coast Guard has repeatedly and more brazenly tested Japan’s resolve to avoid escalating tensions around the Senkaku Islands in the East China Sea.

The law, enacted on Feb. 1, gives Chinese Coast Guard crew members the right to use weapons if needed against foreign ships that ignore their instructions. Less than a week after the law went into effect, Japan learned how serious the Chinese were about implementing it.

“There is no doubt China is gradually increasing the pressure, but there is nothing we can do but respond without escalating the situation,” a high-ranking Japan Coast Guard official said.

The increased Chinese Coast Guard activity around the remote, uninhabited islands claimed by both countries, however, has sparked calls within the ruling Liberal Democratic Party for legal revisions to allow for a stronger Japanese response.

Early on Feb. 6, two Chinese Coast Guard ships entered Japanese territorial waters off the coast of the Senkaku Islands and came within a few hundred meters of a Japanese fishing boat.

A number of Japan Coast Guard cutters were sent to the waters, encircled the Chinese ships and sent radio messages demanding that they immediately leave Japanese territorial waters.

The Chinese ships left after their crews observed the Japanese fishing ship moving out of the area.

The standoff between the two sides lasted more than eight hours.

One of the Chinese Coast Guard ships that entered Japanese territorial waters on Feb. 16 had an automatic cannon on board.

Although Japan Coast Guard cutters are also equipped with automatic cannons, they must abide by strict rules on weapons use, including when foreign ships reject orders or warnings to stop. Moreover, the weapons can only be used at a reasonable minimum level.

Waiting behind the Coast Guards of the two countries are Japan’s Maritime Self-Defense Force and the Chinese Navy.

But the MSDF has until now also been very cautious about its actions.

One high-ranking Defense Ministry official said that rather than have the MSDF and Chinese Navy take center stage, the better alternative would be having the two Coast Guards somehow maintain a delicate balance.

Gen. Koji Yamazaki, the chief of staff of the Joint Staff, said at his Feb. 18 news conference that the SDF was taking the intrusions by Chinese Coast Guard ships “very seriously.” But regarding a response from Japan, Yamazaki only said that the Chinese activity would be carefully watched.

One source said that an increase in Japan’s military engagement in the area would give China the excuse to escalate the situation.

At a Feb. 17 video conference between the top officers of the SDF and U.S. military, Yamazaki was joined by Lt. Gen. Kevin Schneider, commander of U.S. Forces Japan, at the Defense Ministry meeting room in Tokyo’s Ichigaya district.

Sources said it was highly unusual for the top U.S. military officer in Japan to join the session, adding that much of the discussion was devoted to the Chinese Coast Guard law.

The intrusions by the Chinese Coast Guard have led some LDP lawmakers to call for new legislation to handle situations that go beyond the capabilities of the police or Japan Coast Guard.

Some of the more hard-line lawmakers are pushing revisions of laws that currently limit the use of weapons by the Coast Guard to the same level as police officers.

Those lawmakers want the Coast Guard to have capabilities similar to the MSDF.

One Defense Ministry source warned against such proposals.

“If the SDF were called on to deal with the Chinese Coast Guard, that would mean Japan took the first step in using the military, and that would only be playing into the hands of the Chinese,” the source said.

Government sources also expressed concerns that stronger Japanese measures could increase the chances of an accident triggering an escalation.

At the Feb. 17 Lower House Budget Committee session, Prime Minister Yoshihide Suga said that a “calm and firm” response would be made toward Chinese Coast Guard ships.

Chisako Masuo, an associate professor of Chinese politics at Kyushu University, pointed to the vagueness of the term “jurisdictional waters” used in the Chinese Coast Guard law to define where the ships could operate.

“China is arguing that its own laws give it authority, but it is wrong to include unclear terminology in laws,” Masuo said.

She added that it is imperative for Japan to push through legislation that would allow it to respond to what China is doing while further raising awareness within the international community. She noted that many nations are increasingly concerned about Beijing’s actions.

(This article was written by Takashi Funakoshi in Beijing and Shun Niekawa, Yoshitaka Ito and Daizo Teramoto in Tokyo.)