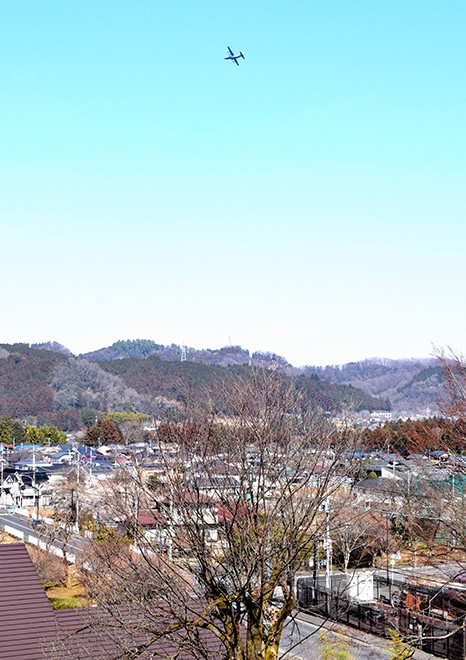 An aircraft believed to belong to the U.S. military circles over urban areas near Tokyo Metropolitan Komine Park in Akiruno, western Tokyo, on Feb. 22. (Jun Sato)

The Tokyo Metropolitan Park Association is apologizing after taking flak over an article in a metropolitan park’s monthly newsletter that gushed over low-altitude flights by U.S. military aircraft and inferred that the association tolerates them.

“There was a misleading statement in the (newsletter) that suggests we tolerate low-altitude flights and other practices, and we apologize deeply for inconveniencing local residents distressed about the noise and other issues,” the association said in a statement posted on its website on Feb. 22.

The association, which is an extra-departmental body of the Tokyo metropolitan government, has retracted the issue of the newsletter and is asking subscribers to discard their copies.

The controversial article ran in the February issue of “Komine-dayori,” a monthly newsletter published by the visitor center at the Metropolitan Komine Park in Akiruno, western Tokyo.

In a section that features a “seasonal sight-to-be-seen,” it depicted a scene of a low-flying U.S. military transport aircraft, a C-130 Hercules, that belongs to Yokota Air Base, located about 10 kilometers east of the park in Fussa.

“The aircraft skims over the hilly terrain that continues from the base into Akigawa Valley, dodges around power-line towers and makes a circle,” the article reads. “It is reminiscent of an air show.”

The article also describes the aircraft as “arguably the world’s best transport aircraft.”

The story features a photo of an aircraft flying while tilted sharply and its caption reads, “An aircraft makes a steep turn and weaves its way through mountain edges while showing its back side.”

Once the editorial process finished on Feb. 10, 400 copies of the newsletter were delivered to about 100 places, including public facilities.

Soon after, people started to send complaints to the association.

“The article has nothing to do with nature, and it is inappropriate to feature a U.S. military aircraft,” one reader said.

“There are people who have suffered from noise from U.S. military aircrafts,” another said.

The association reviewed the article and its editorial process again, and concluded that the process was insufficient.

According to the association, the article’s author has often been asked questions by park visitors curious about seeing U.S. military aircraft in the sky.

The writer intended to use the article to explain what they were witnessing, since the flights generate so many questions from visitors, the association said.

The published article was the first part of a two-part series, titled “Yokota Japan: From the skies of Tama.”

The second part was expected to be published in the March issue, featuring “Operation Tomodachi,” the U.S. Armed Forces’ humanitarian assistance and disaster relief operations, and marking the 10th anniversary of the 2011 Great East Japan Earthquake, tsunami and nuclear disaster.

It was also expected to touch on the park’s disaster-prevention planning.

The association said it will print an apology in the next issue.

As of Feb. 22, the association had asked about 80 percent of the newsletter’s subscribers to discard the February issue.

In cases where the association cannot confirm whether the issue was discarded by a recipient, a staff member will visit the party to retrieve it in person.

Residents living around the Yokota base have increasingly been complaining about the U.S. military’s low-altitude flights in recent years.

The Akiruno city government started keeping track of complaints like these in fiscal 2005. In the first six years, the city received fewer than three complaints a year. But since fiscal 2011, the figures have risen into the double digits.

The city government called the visitor center on Feb. 16 over the article, asking it to “make considerations because it is a delicate subject,” a city official said.

Chihiro Yamashita, one of the residents of Akiruno who complained about the article to the visitor center, said the article “makes a deviation from the park’s essential role, which is to provide a space for citizens to become close to nature.”

“It is also against the mood of residents who have been scared for our lives every day because of the U.S. military’s low-altitude and sharp-turning flights,” said Yamashita, who criticized the association’s lax supervision.