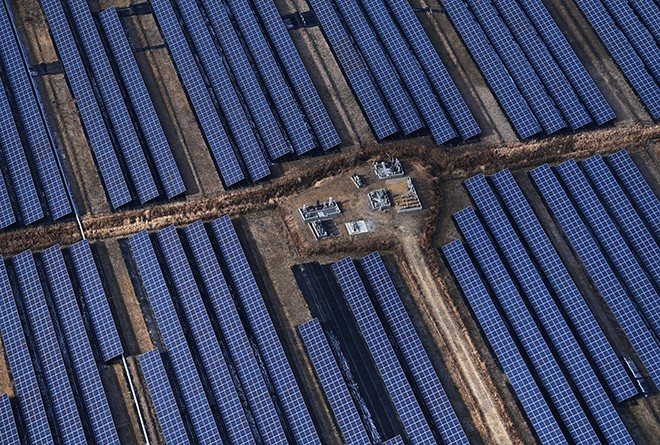 A cemetery in a district in Namie, Fukushima Prefecture, on Jan. 20 is surrounded by solar panels installed on former farmland after the evacuation order was lifted. (Asahi Shimbun file photo)

Only 19 percent of residents in Fukushima Prefecture believe the work to decommission the crippled Fukushima No. 1 nuclear plant is showing “promise” nearly 10 years after the triple meltdown, a survey showed.

Seventy-four percent of respondents in the telephone survey said the situation was “not promising” at Tokyo Electric Power Co.’s nuclear plant.

The survey, jointly conducted by The Asahi Shimbun and Fukushima Broadcasting Co. on Feb. 20 and 21, is the 11th since the Great East Japan Earthquake and tsunami caused the nuclear disaster in March 2011.

The first was conducted in September 2011, followed by surveys on February or March every year from 2012.

The central government and TEPCO have set a goal of completing the decommissioning work “in 30 to 40 years,” but their efforts so far have been hit with various problems and delays.

Although evacuation orders have been lifted, many residents who fled the disaster have not returned to their homes near the plant. Still, the government plans to entice people to move into municipalities around the nuclear plant.

According to the survey, 21 percent of respondents viewed the new settlement policy as “promising” for revitalizing the area, compared with 72 percent who said it was “not promising.”

One constant problem in the decommissioning work is the continual stream of contaminated water that must be stored in tanks at the site of the plant.

With space running out, the government’s policy is to treat the water and dump it into the sea, even though the process will not remove all radioactive substances.

Thirty-five percent of respondents approved this policy, up from 31 percent in the 2020 survey, while 53 percent opposed the policy, down from 57 percent.

However, 87 percent of respondents said they were worried about damage caused by rumors over the dumping of the water into the sea, such as overexaggerated claims about the effects. Of them, 48 percent were “greatly” worried while 39 percent were worried “to a certain degree.”

The government continues to hold explanatory briefings about the water-dumping policy at local sites, but the effort has not reduced the people’s concerns.

The respondents were also asked whether the government should be held responsible for failing to prevent the nuclear disaster from occurring. Eighty-four percent agreed, including 33 percent who said the state has “great responsibility” and 51 percent who cited “a certain degree of responsibility.”

Forty-five percent of respondents in their 60s and 44 percent aged 70 or older said the government was “greatly responsible.”

Twenty-eight percent of respondents gave high marks to the government’s response so far to the nuclear disaster, while 50 percent had low evaluations.

As for TEPCO, 39 percent said the utility has acted responsibly over the 10 years since the accident, compared with 43 percent who said, “It hasn’t.”

And only 32 percent of respondents said the country has learned lessons from the nuclear accident, while 57 percent said it has not.

All nuclear reactors in Japan were shut down following the Fukushima disaster. Much tougher safety standards were established, and some reactors have been brought back online.

Sixteen percent of the Fukushima residents approved restarts of nuclear plants while 69 percent said they should remain offline.

Nationwide, 32 percent were in favor of the restarts and 53 percent were against, according to a phone survey conducted on Feb. 13 and 14 that showed opposition is higher in Fukushima Prefecture.

In the 2019 survey, conducted a year after most of the decontamination work was completed in the prefecture, the figure increased to 52 percent, but it has since remained at around the same level.

Sixteen percent of respondents said they feel “great” anxiety over the effects of radioactive materials released in the accident on themselves and their families, while 48 percent felt a “certain degree” of anxiety.

By sex, 69 percent of female respondents and 59 percent of males felt anxious about the radioactive fallout.

In addition, 79 percent of all respondents were worried that the public will lose interest in the plight of the victims of the nuclear accident. Of them, 34 percent were “greatly” worried and 45 percent were worried “to a certain degree.” Nineteen percent were not worried very much or not at all.

Fifty percent think the image of Fukushima Prefecture has been restored to the pre-disaster level, but only 4 percent “largely” believe this is the case.

The overall figure has improved from 30 percent in the 2016 survey.

But the nationwide survey on Feb. 13 and 14 showed that only 40 percent believe that Fukushima Prefecture’s image has been restored.

The survey used home phone numbers for voters in Fukushima Prefecture, excluding some areas, selected at random by computer. It received valid responses from 1,049, or 54 percent, of the 1,955 voters contacted.