SUMO/ Foreigners wrestle with having to become Japanese citizens 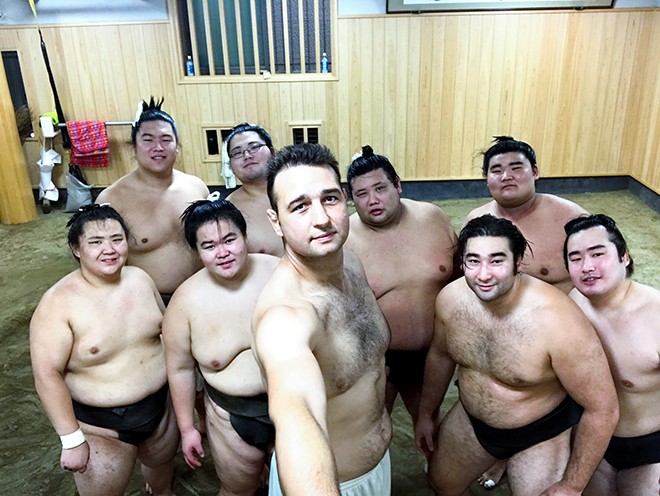 As he did during his successful sumo career, Kotooshu never quit when things got difficult and kept strongly moving forward in life outside the dohyo.

Today, the former Bulgarian ozeki, who now heads the Naruto stable and is known as stablemaster Naruto, is striking a blow for others like him in the traditional sport.

It is not easy for foreign wrestlers to become stablemasters after retirement as they face mountains of hurdles, including Japanese citizenship requirement and few ties with Japanese schools to scout talent.

Although officials in the sumo world underline the importance of passing down Japanese culture, active and former foreign wrestlers are increasing their presence to provide a solid foundation for the sport.

Naruto, 38, one of the most popular and recognizable sumo stars in his heyday, is one shining example. He was the first European to reach the second-highest rank of ozeki in 2006.

His success in luring promising wrestlers is particularly remarkable because scouting them is an enormous challenge for foreigners like himself who cannot exploit their connections with Japanese home cities and schools, unlike their Japanese counterparts.

Many of the Naruto stable’s 14 wrestlers came from schools famous for turning out competitive wrestlers, including Oshoryu, a graduate of Kindai University.

It took Oshoryu only a year and half to progress near the second-tier juryo division after making his debut at sumo’s lowest jonokuchi division, a rare feat.

Naruto has cashed in on social media to draw fans and hopefully future wrestlers, streaming morning practice sessions and events involving his stable. The use of social media is proving particularly useful as social exchanges and gatherings are restricted in the coronavirus pandemic.

“Some kids show up to experience sumo after watching our videos,” Naruto said. “Since we cannot have exchanges with fans due to the pandemic, we are streaming more often.”

When the former ozeki visits schools, he passionately talks about sumo and trains students. A video camera is installed on the ceiling of his stable’s training room so that Naruto can analyze each wrestler’s moves and techniques.

But things were difficult soon after he set up his own stable four years ago, Naruto recalled. When he visited a high school known for a strong sumo team, a coach turned him away, saying the school would do business only with a certain stable.

But he did not give up. Naruto kept returning to schools to scout and those visits are now bearing fruit.

“I am growing up together with my apprentices, devoting my whole life to sumo,” he said.

Perhaps one of the hardest hurdles to clear for foreign-born wrestlers who wish to progress to become stablemasters is the requirement to acquire Japanese nationality.

Wrestlers are not required to change their nationality when they are active. But Japanese citizenship is necessary if a wrestler wishes to become a stablemaster, a requirement added in 1976 by the Japan Sumo Association, the governing body of professional sumo.

It was the time when Takamiyama, who is from Hawaii, was a trailblazer in the raised ring. He became the first foreigner to win a grand sumo top division championship in 1972.

The JSA did not make clear the reason for setting the high bar. One speculation was that some were concerned that foreign wrestlers cannot fully teach traditions and conventions behind the sport dating to ancient times.

Obtaining Japanese citizenship can be a big decision for many foreign wrestlers because Japanese law does not allow citizens to hold multiple citizenships. As a result, those wishing to acquire Japanese nationality must relinquish their status as a foreign national.

There are more than 100 stablemasters and 44 stables. Of these stablemasters, only five, including Naruto, are foreign-born shisho, who own their stables.

Not all foreign wrestlers choose to acquire Japanese nationality without reservation.

Active yokozuna Hakuho and Kakuryu, who are both 35, have acquired Japanese citizenship after renouncing their status as Mongolian nationals to become stablemasters when they retire.

But it took Hakuho years to make up his mind to do so as his father, a legendary figure in the Mongolian wrestling world, had opposed it.

Fellow Mongolian and former sekiwake Kyokutenho, who is now stablemaster Tomozuna, said it was an agonizing decision to relinquish his Mongolian nationality.

“People told my parents in Mongolia, ‘Your son sold out his country and relatives for money’ and ‘You sold your son to Japan,’” said Tomozuna, who became the first Mongolian wrestler to acquire Japanese citizenship in 2005. “I can endure the name calling, but it was tough for my parents.”

Rikido Tomikawa, a professor well-versed in sumo at Nihon Wellness Sports University, said acquiring Japanese citizenship will not be necessary if new rules are set.

“Many apparently believe that only Japanese can teach Japanese culture properly, but that is not true,” he said. “There is no point in changing nationalities.”

Tomikawa, who hails from the Inner Mongolia Autonomous Region of China, was naturalized in 2000.

“I love Japan, but if you ask me whether I am genuinely Japanese both body and soul, I would say ‘half-and-half’ or less than that,” he said.
Tomikawa, 57, proposed that wrestlers obtain permanent residency status or sign a contract to remain involved in the sumo world, rather than being required to relinquish their nationality.

“How would you feel if Ichiro were required to acquire U.S. citizenship to become a baseball coach in the United States?” he said. “Sumo must be the only sport that you are obliged to change your nationality to move on to become a coach.”

Tomozuna, 46, said his initial resistance to the Japanese citizenship requirement has eased over the years.

“Fans will find rooting for foreign sumo wrestlers worthwhile if they can see the wrestlers’ commitment to the sport and Japan,” he said. “There is not only one way of teaching sumo. Foreign wrestlers can also teach well, drawing strength from their backgrounds as coming from other countries.”
Today, 28 active wrestlers from eight countries belong to the JSA.

The JSA has formed a third-party panel to explore ways to sustain the Japanese traditional sport in the coming decades.

(This article was written by Kenichi Hato, Ryusaburo Matsumoto and Kensuke Suzuki.)