Toyota begins building its own prototype smart city ‘of the future’ 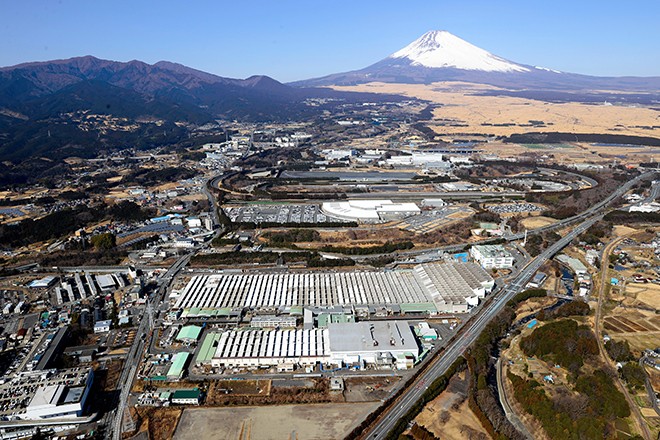 Toyota Motor Corp. builds Woven City, a prototype city of the future, at the former site of Toyota Motor East Japan Inc.’s Higashi-Fuji Plant, seen in the front, in Susono, Shizuoka Prefecture. This photo was taken on Feb. 11. (Koichi Ueda)

Toyota Motor Corp. has started building a prototype “city of the future,” an unusual move by an automaker to build an entire town from scratch and use it as a laboratory for cutting-edge technology.

In its new “Woven City” project, Toyota will test all sorts of state-of-the-art tech, including self-driving cars and artificial intelligence.

It plans to leverage the testing ground to craft new products and services so it can expand its business model, as the market becomes increasingly crowded by tech companies and other new players from outside of the traditional automobile sector.

The automaker said it will also strengthen cross-sector partnerships to create next-generation innovations as competition intensifies.

Construction work on the future-city project began on Feb. 23.

The city is being built at the former site of Toyota Motor East Japan Inc.’s Higashi-Fuji Plant, which had manufactured unique car models, including the high-end Century, until it closed for good at the end of last year. The site is located at the foot of Mount Fuji.

“We will take over (the spirit of the plant) to create a future of mobility,” Akio Toyoda, president of Toyota Motor, said after a groundbreaking ceremony on Feb. 23.

The construction of Woven City is in its first phase, and work to demolish the old plant is also under way. No specific deadline has been set to build the entire city, which spans 700,000 square meters.

Toyoda said construction of the “living laboratory” city “will never be completed.”

The company will likely start with developing self-driving technology in Woven City because it is easier to build new roads to test the technology. A senior Toyota Motor official said the automaker cannot experiment freely on existing public roads because of the high risk of accidents with pedestrians and cyclists.

Elderly people and families with young children are expected to be among the first to move into the city. Inventors will also live there to work on developing solutions to social challenges.

Toyota is also reaching out to partners beyond the automobile sector, as the project spans a wide range of areas. In March last year, the automaker formed a capital and business alliance with Nippon Telegraph and Telephone Corp. to jointly work on smart-city projects.

Smart-city demonstrations and experiments are being carried out across the country to improve how cities function and make daily life more comfortable. NTT is one of the companies that has expressed the most interest in the area. Toyota Motor is also calling on businesses and researchers outside Japan to join its Woven City project.

The automaker launched the project with a sense of urgency that it can no longer survive solely on its current business model of manufacturing and selling cars.

In the United States, a major tech firm tapped into the industry and began operating unmanned self-driving taxis. Media recently reported speculation that Apple Inc. has been in talks with Japanese automakers to enter the electric vehicle business.

Toyota aims to transform itself into a “mobility” company that offers a variety of services beyond selling cars. The automaker plans to accelerate its research and development through the Woven City project, which allows it to freely experiment with leading-edge technology.

Residents will likely be asked to provide their personal information as the city plans to share all its data on the internet. The automaker could then speed up technological developments with consent from people living in the city for offering up their information, officials said.

Still, privacy concerns remain that residents will be monitored, posing a challenge in smart-city projects. Toyota aims to build a system to avoid monopolizing that kind of data, officials said.

(This article was written by Takuro Chiba, Ryo Inoue and Jumpei Miura.)