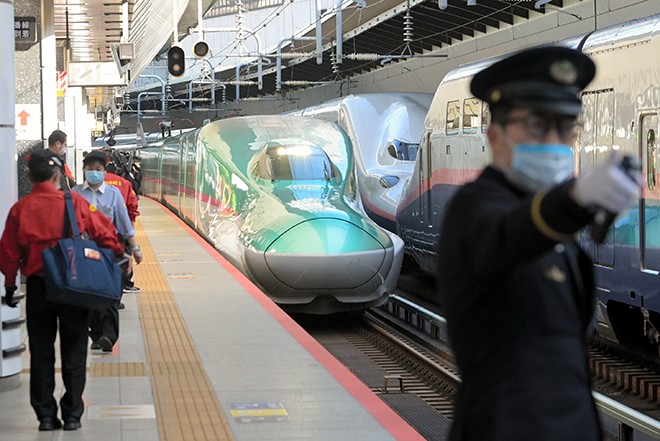 Operation of the entire Tohoku Shinkansen line resumed on Feb. 24 after a portion of the railway section was suspended following a major earthquake that occurred off the coast of Fukushima Prefecture on Feb. 13.

According to East Japan Railway Co., it will operate bullet trains at reduced speeds between Nasushiobara and Ichinoseki stations for the time being.

The number of Shinkansen will be decreased to about 80 percent of normal. It will also take about one hour longer for the run between Tokyo and Sendai.

On Feb. 24, a 40-year-old male company employee, a Sendai resident, arrived at Tokyo Station on the Hayabusa No. 2 bullet train from Sendai.

He said that he was unable to go on a business trip due to the suspension of the Shinkansen line.

“Finally, the railway line has started to get through,” he said.

Direct train service of the Akita and Yamagata Shinkansen to and from Tokyo also resumed on Feb. 24.

On the other hand, most of the direct train service of the Hokkaido Shinkansen remains suspended, and the trains will shuttle to and from Shin-Aomori Station for now.

It is expected to take about a month for the train timetables to return to normal.