‘Why can’t we go there?’ Girl longs for first visit to Fukushima home 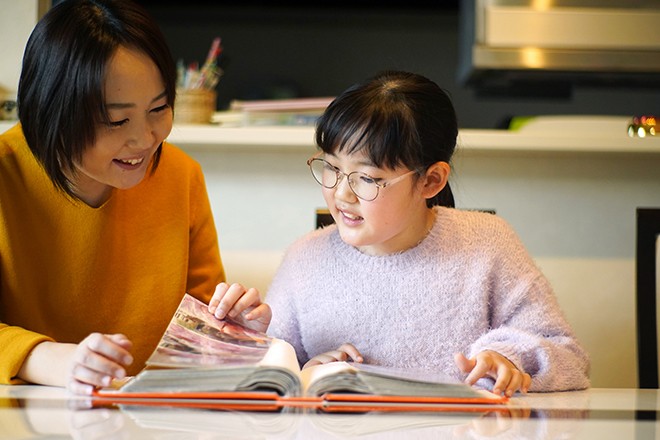 Runa Hoshiyama looks at an album of photos taken when she was a baby with her mother, Mayumi, at their home in Minami-Soma, Fukushima Prefecture, in January. (Shigetaka Kodama)

MINAMI-SOMA, Fukushima Prefecture--Runa Hoshiyama is starting to ask questions that her mother is reluctant to fully answer.

Many of the girl’s queries are directly related to events that occurred on the day she was born nearly 10 years ago.

One such question came in October last year when Runa was in the backseat of a car driven by her mother to see the blockbuster hit anime “Demon Slayer: Kimetsu no Yaiba” at a commercial complex about 70 kilometers south of their home in Minami-Soma.

When the fourth-grader was looking out the window, a building overgrown with ivy on a national road caught her attention. A nearby side street was closed to vehicular traffic.

“What is that building that looks like a haunted house?” the 9-year-old asked.

Her mother, Mayumi, 40, replied: “That is a post office. (Ivy has) covered the walls because it has been left unattended for a long time.”

The neighborhood is designated as a “difficult-to-return zone,” where radiation levels have remained high since the triple meltdown at Tokyo Electric Power Co.’s Fukushima No. 1 nuclear power plant following the Great East Japan Earthquake and tsunami.

“Everyone fled after the earthquake, didn’t they?” said Runa, who appeared to be in a bad mood. “I wish all earthquakes were gone.”

At the time, their family home in Tomioka town was located about 7 kilometers from the nuclear plant and they were forced to evacuate. The entire town later became a no-entry zone.

Before the disaster, Mayumi worked mainly as a tour guide at the No. 1 plant, trained to teach visitors the mechanism of power generation and the safety of its system.

She also met her future husband, Koichi, 43, who was working for a TEPCO partner, at the plant.

For Mayumi, the unimaginable became a reality.

Although well-versed in how nuclear power plants work, Mayumi had to grapple with unfamiliar terms during her time as an evacuee, such as low-dose exposure and thyroid glands.

Worried about the effects of radiation on her daughter, Mayumi avoided using tap water for baby formula and let the girl play outdoors for only up to one hour. She also made it a rule to thoroughly wash Runa’s tiny hands after returning home.

Two years after the disaster, evacuees were allowed to visit some areas in Tomioka during the day as decontamination and recovery efforts progressed.

Runa became a first-grader in April 2017, when evacuation orders were lifted for certain areas of Tomioka to allow people to live in the town.

Although it has been almost four since then, the Hoshiyama family is still not allowed to freely visit their Tomioka home in the difficult-to-return zone.

Neither Runa nor her brother Sei, 7, has stepped inside the house.

“Why do buildings remain broken?” Runa asks her mother. “What happened to our house?”

Mayumi is not sure how to tell her daughter about the nuclear disaster and what happened to her hometown.

The nuclear power plant was at the center of the community. She could make a living, meet her future husband and start a family because of her work there.

Mayumi wants to use her own words to explain to Runa some day what the family went through and how she felt, but she also feels it may be too early for the girl to fully understand the story.

“I want Runa to love my hometown, which is full of memories,” Mayumi said.

Mayumi said she wants to take her daughter to the Tomioka home, the row of cherry blossom trees that is the symbol of the town, and the beach where she went on a date with Koichi.

Those aged 14 or younger are required to refrain from entering difficult-to-return zones.

When Mayumi and Runa opened a photo album in their home in Minami-Soma in January this year, they talked about their house in Tomioka.

“Why can’t we go there?” the girl asked.

“Because there is a promise that you can go there when you turn 15,” the mother replied.

Runa laughed and said: “Five more years? I want to see what our house was like.”