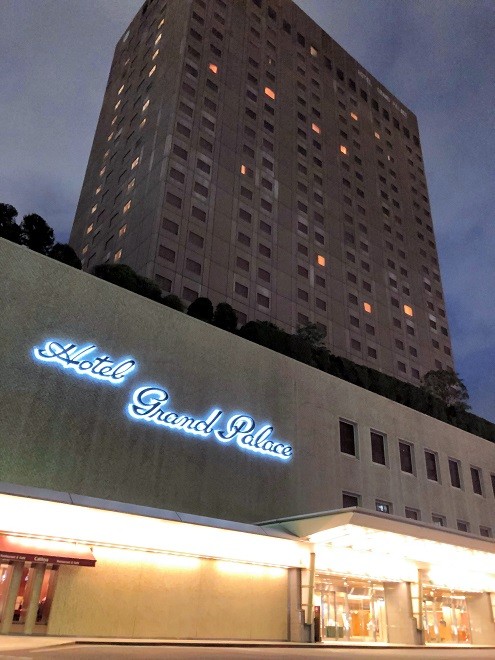 The Hotel Grand Palace in Tokyo’s Chiyoda Ward which will close for good at the end of June. Photo was taken on Feb. 18. (Takehiro Tomoda)

Long-established hotels are falling like dominoes, victims of hard times brought on by the COVID-19 pandemic.

Part of the reason is their failure to adjust to new business norms during the health crisis that has seen occupancy rates plummet.

In this environment, they found it difficult to raise funds to refurbish aging facilities.

Alarmed by the development, hotel operators are being urged to seek assistance from third parties to ensure that historically significant properties survive in some form.

Asahi Sakurai, head of the management department of the Hotel Grand Palace in Tokyo’s Chiyoda Ward summed up the situation facing many operators when he said, “We haven't generated big profits for a long time and our financial situation has worsened to the extent we can no longer wait for the market to pick up.”

Situated in a prime location close to the capital’s Nippon Budokan hall, the Hotel Grand Palace opened its doors in 1972.

The hotel is where Kim Dae-jung, then a South Korean dissident leader who was staying there, was abducted by government agents from Seoul the following year. He later became president of South Korea.

“We promoted our facility as a city hotel that meets global standards to attract guests from both in and outside Japan while offering community-based services at the same time,” Sakurai said.

The hotel was also served as a venue for the drafting session by professional baseball teams.

The novel coronavirus outbreak has taken a heavy toll because foreign guests, who typically accounted for as much as 50 percent of the clientele, stayed away in droves.

As a result, the hotel hosted far fewer functions, conferences and marriage ceremonies. Its total revenue in 2020 plunged 70 percent from 2019.

In addition, the government's “Go To Travel” campaign to encourage people to make trips had only a “limited effect,” Sakurai said.

The dismal business outlook caused the Hotel Grand Palace to decide to cease its operations at the end of June even though it will soon mark the 50th anniversary of its opening. What will happen to the hotel building, the land it occupies and the operating company remains to be determined.

The imminent demise of the Hotel Grand Palace marks a sad chapter in Japan's hotel industry. But it is anything but alone. A succession of hotel operators around the nation are finally having to call it quits.

For example, the Hotel New Hiroden, which opened in 1974 near JR Hiroshima Station in Hiroshima’s Minami Ward, shut down in January.

At the end of March, the Toyama Dai-ichi Hotel in central Toyama will shutter its doors after being in business since 1982.

The Kirishima Kokusai Hotel in Kirishima, Kagoshima Prefecture, which started operations in 1971, will wrap up its business in May.

The primary reason given for the closures is the financial inability of the hotel operators to renovate their buildings and equipment. The issue of aging is notably grave among established operators.

Hotels constructed in 1981 or earlier under old earthquake resistance standards are currently doing their best to carry out drastic refurbishment work to enhance the seismic resistance of their facilities. Operators that have yet to update their facilities now face the daunting challenge of how to overcome task.

The virus pandemic delivered an additional blow to those hotels, pushing many operators to abandon their hopes of continuing in business.

Yuto Takega, an official of Nihon M&A Center Inc., predicted that more hotels with long histories will close in the future, but with the caveat that he “will do everything possible in the way of providing consultations to preserve their histories and traditions.”

Takega explained that companies may be able to cover their renovation costs and keep running their accommodation facilities if they accept assistance in the form of investment from third parties.

“Established operators are often reluctant to consider mergers and acquisitions, but I hope they will feel free to contact us for advice because many options are open to them,” he said.