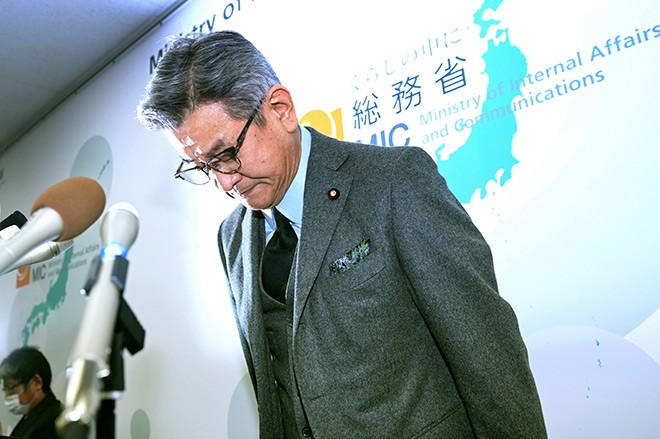 Ryota Takeda, the communications minister, apologizes at a Feb. 24 news conference when disciplinary measures were announced against ministry officials wined and dined by a satellite broadcaster. (Ryo Kato)

The telecommunications ministry has released the results of its investigation into the wining and dining of bureaucrats by a satellite broadcaster, but it left many questions unanswered, such as why.

The government announced disciplinary measures on Feb. 24 against seven high-ranking bureaucrats in the form of pay cuts ranging from 10 to 20 percent over one to three months, and issued various warnings to four other officials.

Two were warned, according to telecommunications ministry regulations.

The move appears to be an attempt to nip the widening scandal in the bud before it grows any larger.

The issue centers around lavish meals for bureaucrats that were paid for by Tohokushinsha Film Corp., a satellite broadcasting operator that employs Prime Minister Yoshihide Suga’s eldest son, and is regulated by the communications ministry.

The scandal recently expanded to include Makiko Yamada, the Cabinet public relations secretary who had a dinner of more than 70,000 yen ($660) paid for by Tohokushinsha in November 2019. She was still a high-ranking communications ministry official at the time.

The first woman named to her current post, Yamada appeared at the Lower House Budget Committee on Feb. 25 and apologized for being wined and dined by Tohokushinsha.

“Due to my own lax awareness, I have caused a great deal of damage to the trust of national civil servants,” Yamada said. “By continuing in my current position, I hope to personally improve myself.”

Although Yamada was not among the ministry officials disciplined because she no longer works there, she voluntarily returned 60 percent of her salary for one month.

The ministry investigation found Tohokushinsha to be a policy stakeholder, meaning that the ministry bureaucrats had violated the National Public Service Ethics Code by accepting the free meals and drinks, as well as taxi rides home and other gifts.

The investigation said it could not confirm there was any possible effect of Suga’s son attending all the meals enjoyed by the bureaucrats.

The investigation also concluded that Tohokushinsha was the only company that had regaled the bureaucrats with free dinners.

But that conclusion was reached in part because the ministry went over the company’s records of entertaining ministry officials over the past five years. None of the officials came forward to admit they had been entertained by the company.

While all the officials said Tohokushinsha was the only company that paid for their meals, there was no clear reason provided for why the company made such expensive expenditures on entertaining bureaucrats.

Reporters peppered Ryota Takeda, the communications minister, with questions about whether Tohokushinsha was the only company involved and why it felt the need to woo the bureaucrats.

“I believe it would be more appropriate to frankly admit that we do not know the direct reason” for the entertainment, Takeda said.

The ministry investigation came up with three main reasons why the high-ranking bureaucrats allowed themselves to be wined and dined over several years by Tohokushinsha and let it pick up the tab.

One reason was that the officials conveniently concluded that the company was not a policy stakeholder, even though the ministry oversees satellite broadcasting companies. The officials also felt that they could be wined and dined in excess of amounts considered normal because they had decided the company was not a stakeholder. They also had little sense that their meals had to be reported beforehand to the ministry if they were expected to exceed 10,000 yen per person.

Tohokushinsha has asked its lawyers to investigate into its activities entertaining bureaucrats, and company officials pledged on Feb. 24 to release the results of that study in an appropriate manner and discipline those involved.

The company had applications for satellite broadcasting ventures approved and renewed over the five-year period in which it paid for bureaucrats’ meals.

The ministry is planning to set up a third-party panel to examine any possible effects on policy decisions as a result of the extensive wining and dining, although it is not clear what more will come out of it.

(This article was compiled from reports by Amane Sugawara, Tomoya Fujita and Ryo Toyoka.)