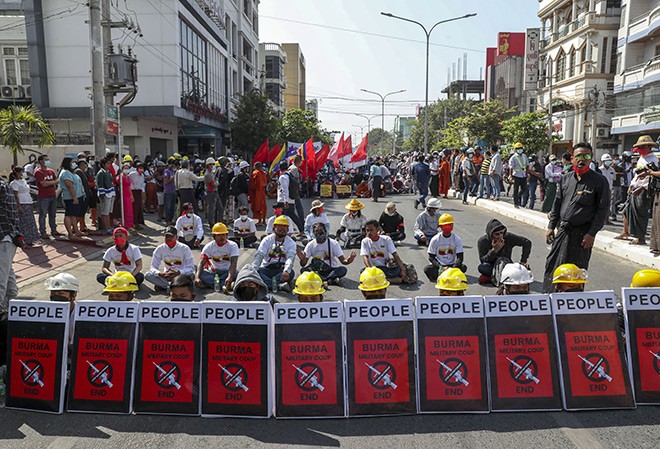 The government has decided on a different approach from Western nations in dealing with the military government in Myanmar.

Rather than impose sanctions against the generals who were involved in the coup against the democratically elected government, Japan will continue to keep channels of communications open to find a democratic way of resolving the situation in Myanmar.

At the same time, the decision has been made to suspend new official development assistance (ODA) projects to Myanmar. That move will have a substantial effect, given that Japan is the second largest provider of such assistance.

The government has determined that the military gained control of the government through the coup and has criticized the use of violence against demonstrators. Given that background, several government sources said the decision had been made to hold off on ODA for the time being.

Japan will continue to provide humanitarian support through international agencies and nongovernmental organizations.

That figure was the highest among advanced nations, a high-ranking ministry official said, second only to China, which does not release actual figures of its assistance.

“Japan’s strength is having a communications channel with the military, the only one with such access among Western nations,” one Foreign Ministry official said.

Economic ties with Myanmar have also increased in recent years as about 430 Japanese companies have set up offices or plants in the Southeast Asian nation.

Japan also has concerns that Chinese influence over Myanmar would only increase if it felt isolated from the international community.

For such reasons, Japan has been reluctant to implement sanctions even as other Western nations froze the assets of the top generals in the Myanmar military in the wake of fatalities among protesters.

But a high-ranking government official said Japan could not provide economic assistance because such a move would be seen as a formal recognition of the military government.

Japan has suspended new ODA projects in the past such as in 2014 after a military coup took control of the Thai government.

Once the Cabinet approves a project, signed agreements have to be exchanged with the other nation. Some government officials said it would be difficult to acknowledge Myanmar's current government as a legitimate one capable of entering into such an arrangement.

But countries continue to apply pressure on the military government.

Foreign ministers of the Group of Seven nations released a statement on Feb. 23 that said anyone using violence against peaceful protesters in Myanmar would be held accountable.