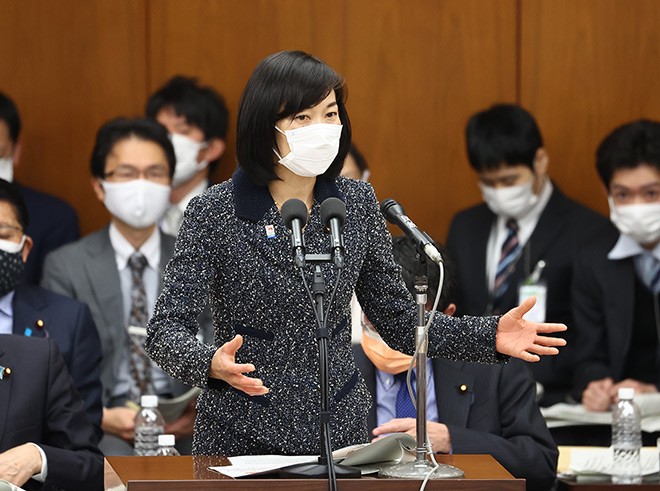 Tamayo Marukawa, minister in charge of women’s empowerment and gender equality, responds to a question at the Feb. 24 session of the Lower House Cabinet Committee. (Kotaro Ebara)

Japan’s minister in charge of women’s empowerment and gender equality acknowledged that she signed a document that opposes dual surnames for married couples but insisted her “personal belief” would not affect her duties.

Tamayo Marukawa recently took over the Cabinet post from Seiko Hashimoto, who became chief of the Tokyo Olympic organizing committee following the resignation of Yoshiro Mori over his sexist remarks.

Marukawa is married to Taku Otsuka, a Lower House member of the ruling Liberal Democratic Party. But she uses her maiden name during her activities as a lawmaker.

The document, dated Jan. 30, was sent to members of the Saitama prefectural assembly, which is seeking to adopt a written opinion calling for a system that allows married couples to use separate surnames.

Fifty Upper and Lower House members of the LDP signed the document to express their opposition to such a system.

At a news conference on Feb. 24, Marukawa said that she agreed with the contents of the document and signed it.

But she also noted that she is in a position to promote gender equality within the government, and that she intends to put her ministerial duties before her own opinion.

Marukawa also doubles as minister in charge of the Tokyo Olympic and Paralympic Games, an event that is committed to ensuring gender equality.

“I will do whatever I can, including setting aside my own thoughts, to gain the understanding of the international community to hold the Games,” she said.

Mori’s comments about “competitive” women talking too much at high-level meetings drew international criticism and shed additional light on gender equality issues in Japan, including the law that requires married couples to use the same surname.

Opposition lawmakers are questioning Marukawa’s stance as a minister who is supposed to work toward realizing gender equality.

At the Feb. 24 session of the Lower House Cabinet Committee, Masako Okawara, a member of the main opposition Constitutional Democratic Party of Japan, asked Marukawa how she intends to lead discussions on the dual surname system for married couples.

“My role is to help create an environment where the public can deepen their discussions (on the issue),” Marukawa said.