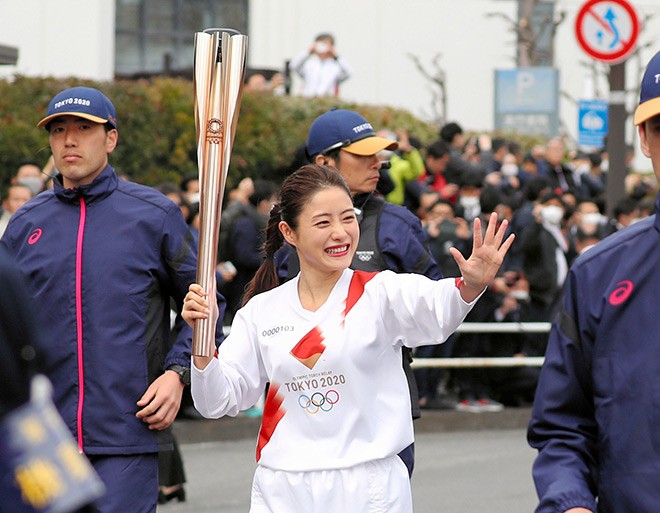 The 121-day ceremonial marathon leading up to the Olympics will happen after all--that is, unless things go wrong and it is snuffed out.

The 2020 Tokyo Games organizing committee on Feb. 25 announced a new set of guidelines for the Olympic torch relay, scheduled to start in a month, to reduce the risk of infection from the novel coronavirus.

And it is reserving the ability to pull the plug on the relay if the route becomes overcrowded.

Only locals will be allowed to watch the relay along the route under the new rules.

But they are also strongly encouraged to stay home and watch the video livestream of the relay provided by Japan Broadcasting Corp. (NHK), the organizer said.

The number of attendees to the ceremonies scheduled along the route nationwide to celebrate the arrival and departure of the Olympic torch will be limited to those who reserve a spot in advance.

Officials have decided not to shut out spectators because one of the main purposes of the relay is to foster momentum toward the Summer Games.

Instead, the organizer is urging people to take thorough anti-virus measures, such as wearing a mask, clapping instead of cheering, and avoiding travel to a different prefecture.

The relay is scheduled to start from J-Village in Fukushima Prefecture on March 25 and end in Tokyo on July 23. About 10,000 runners will relay the torch through 859 municipalities over 121 days.

But if too many people end up gathering along the route and create a high-risk situation where infections could spread, the organizer will shut down the relay.

Famous athletes and celebrities have been billed to represent each prefecture in the relay run and attract more attention to the Games.

But the plan for holding it during the pandemic is only going to make matters worse.

Under the new guidelines, they will be asked to run where authorities can easily control the number of spectators to avoid congestion, such as inside a stadium.

All torchbearers will be required to check their health and refrain from dining out starting two weeks before their assigned running date.

On their relay day, they will still have to wear a mask, except during their actual run.

If a torchbearer lives in a prefecture under a state of emergency and has to travel to another prefecture to join the relay, they will be urged to take a polymerase chain reaction (PCR) test. The organizer will cover the cost of the test.

The organizing committee said it notified all the prefectures about the new guidelines by Feb. 24.

In the event a state of emergency is issued in a prefecture, officials will likely cancel the portion of the relay that passes through the prefecture’s public roads. They would then likely hold a closed-door ceremony to light the Olympic torch.

Depending on the infection situation, “the public might be urged to refrain from watching the relay along the route, and the relay route might be changed,” the guidelines said.

The relay will first pass through Fukushima, Tochigi, Gunma and Nagano prefectures.

The organizer said it will go on in these prefectures as planned.

But in Tochigi Prefecture, where the relay is scheduled to start on March 28, residents are still urged not to go out unless it is necessary and urgent.

The organizer remains hopeful that holding the torch relay on public roads in the prefecture is still possible. But officials have yet to make their final decision and will continue to discuss the matter with the prefectural government.