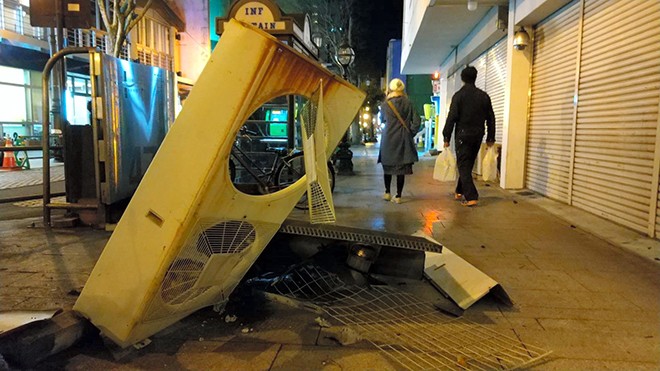 An outdoor unit of an air conditioner believed to have fallen from a building in Fukushima, Fukushima Prefecture, following a powerful earthquake on Feb. 13 remains smashed on the ground on Feb. 14. (Taro Kotegawa)

The first death from the powerful quake that rattled northeastern Japan late at night on Feb. 13 has been reported in Fukushima Prefecture.

A local resident in his 50s was crushed to death by falling furniture following the quake, the Fukushima city government said on Feb. 25.

The man’s family found him dead at his home, where he lived alone, on Feb. 23 after failing to contact him, according to city officials.

The man died from suffocation resulting from being crushed. Officials determined that he died in the earthquake since the estimated time of his death is shortly after the quake occurred at 11:07 p.m., the city government said.

The earthquake, which struck off the coast of Fukushima Prefecture, recorded an intensity of lower 6 in the city on the Japanese scale of 7.

The temblor, believed to be an aftershock of the March 2011 Great East Japan Earthquake, left 185 people injured in 10 prefectures, including Fukushima and Miyagi, according to the Fire and Disaster Management Agency.