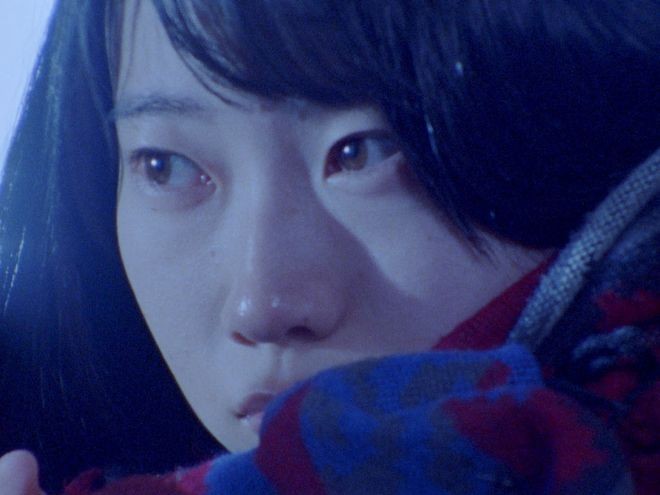 A scene from "Humongous!" (Provided by Aya Kawazoe)

The graduate student's 11-minute tale, shot in 16mm film, has won rave reviews, with one foreign critic lauding her direction of the film that blurs the lines of reality and invites the audience into a dreamlike state through the eyes of its protagonist, Eiko.

"I wanted to express what can be described as a 'premonition,' which makes me feel something humongous could fall on me, using visual and audio effects," the director said of the film, which features pale blue imagery and muffled noises.

Though she admits that the short is an experimental film whose story is difficult to understand, Cannes officials offered high praise for its avant-garde attributes.

The festival's 2020 edition was unable to be held in its usual format last year due to the COVID-19 pandemic, but the film was screened in Paris in October.

Kawazoe, born in Yokohama in 1989, attended Tama Art University to learn filmmaking. She studied under director Shinji Aoyama, who served as an instructor, and learned the thrill of expressing herself on film through group work.

She is currently enrolled at the Graduate School of Film and New Media at Tokyo University of the Arts and studying under director Kiyoshi Kurosawa.

Kawazoe produced "Humongous!" as a practice project for her master's course.

Though Kawazoe has pursued experimental expression by combining film and digital imagery, she aspires to play for keeps in narrative cinema, on which her "mentors" put their focus.

"I'm currently interested in how to surprise people with compositions, cuts and transition and other directorial techniques," she said. "I also want to make feature-length commercial films someday, like Aoyama and Kurosawa."

One of her long-cherished dreams, to have her work screened in theaters, will soon become a reality.

"Humongous!" will be shown at Theater Image Forum in Tokyo's Shibuya district starting from April 24, along with three of her past short and mid-length films including "The Elephant Died" and "Flame Out."

Kawazoe said she hoped people who see the film will pick up on all the elements she included.

"I want the audience at the theater to experience the vibrations generated by the sounds for which I went to great lengths to create, just like I did for the flickering of light," she said.