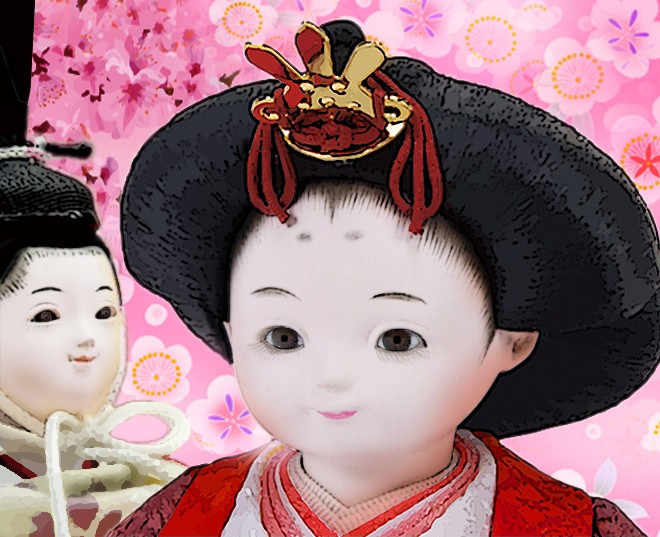 from the aviary
at far end of the garden
daybreak sonata
--Paul Callus (Safi, Malta)

how about giving
a different name and background
when meeting someone new
--Foteini Georgakopoulou (Athens, Greece)

The haikuist hair-sprayed a display of dolls. A glue hairdo could have damaged them. On the third day of the third month on the Japanese calendar, women traditionally decorated their hair with willow branches symbolizing a long and healthy life. The haikuist also cut tiny masks. Vandana Parashar checked for her phone, keys and mask before going out to shop for new clothes.

Making masks
for herself, her dolls
granddaughter

Alwine Kose announced “It’s a girl” during a unique gender-reveal get-together in Germany.

Why mourn the cherries?
mourn the pink kissed face and breast
of a lonely wife

Helga Stania crooned “A woman left lonely” in Ettiswil, Switzerland. The haikuist’s idol, Janis Joplin (1943-1970), replied from the depths of her soul “well, the fevers of the night, they burn an unloved woman.” Rose Mary Boehm pined in Lima, Peru. Sherry Grant’s haiku from Auckland, New Zealand, will steal your heart.

Buddhist nun Chiyo-ni (1703-1775) composed an autumn haiku that can be translated as follows: morning glory! the well bucket-entangled, I ask for water. Cognizant of the Japanese practice of ringing temple bells to rid the sins committed in the previous year, Randall Herman shared this haiku from Victoria, Texas.

After reading the following translation of a haiku by Tohta Kaneko (1919-2018), Kanematsu gazed at vibrant and deep indigo blues in the sky over his head: Plum trees are blossoming and all around the garden, blue sharks are arriving.

Plum blossoms
blue sharks Tohta saw
where are they?

An evergreen conifer that grows beside Amy Losak’s home in Teaneck, New Jersey, reminded her that slow learners at school used to be told to sit in a corner and forced to wear a conical white paper hat. Rosemarie Schuldes’ hedge was brilliant. Clinging to memories, she hasn’t taken down festive decorations in Mattsee, Austria. Vladislav Hristov’s trash can’s full in Plovdiv, Bulgaria.

christmas tree
sticks out
even in the bin

Nani Mariani ran her finger down a well-worn jamb in Melbourne, Australia. Marshall Hryciuk lives in a lovely old home near residential parks in Toronto. Hidehito Yasui bemoans the state of emergency to prevent the spread of COVID-19 in Osaka.

wooden window frames
the beauty of the fallen grain
winter

leaf upon leaf
tumbling in light before me
intersection of oaks

Winter blast
benches in the park
exclusive for fallen leaves

Ramona Linke felt the American Wild West. Hryciuk marveled at a 2,000-kilometer long river that flows from southwestern Canada to the Pacific.

first wind of the year--
the snowdrop just emerges

Ian Willey watched his daughter blow out 16 candles, musing to himself, “You think they’ll keep growing forever and I suppose they do.” Dina Towbin lost more than a tree in Lima, Peru.

smoldering candles
my daughter says she isn’t
growing any more

Grow with http://www.asahi.com/ajw/special/haiku/. The next issue of the Asahi Haikuist Network appears Mar. 19. Readers are invited to send haiku about gales on a postcard to David McMurray at the International University of Kagoshima, Sakanoue 8-34-1, Kagoshima, 891-0197, Japan, or e-mail to (mcmurray@fka.att.ne.jp).