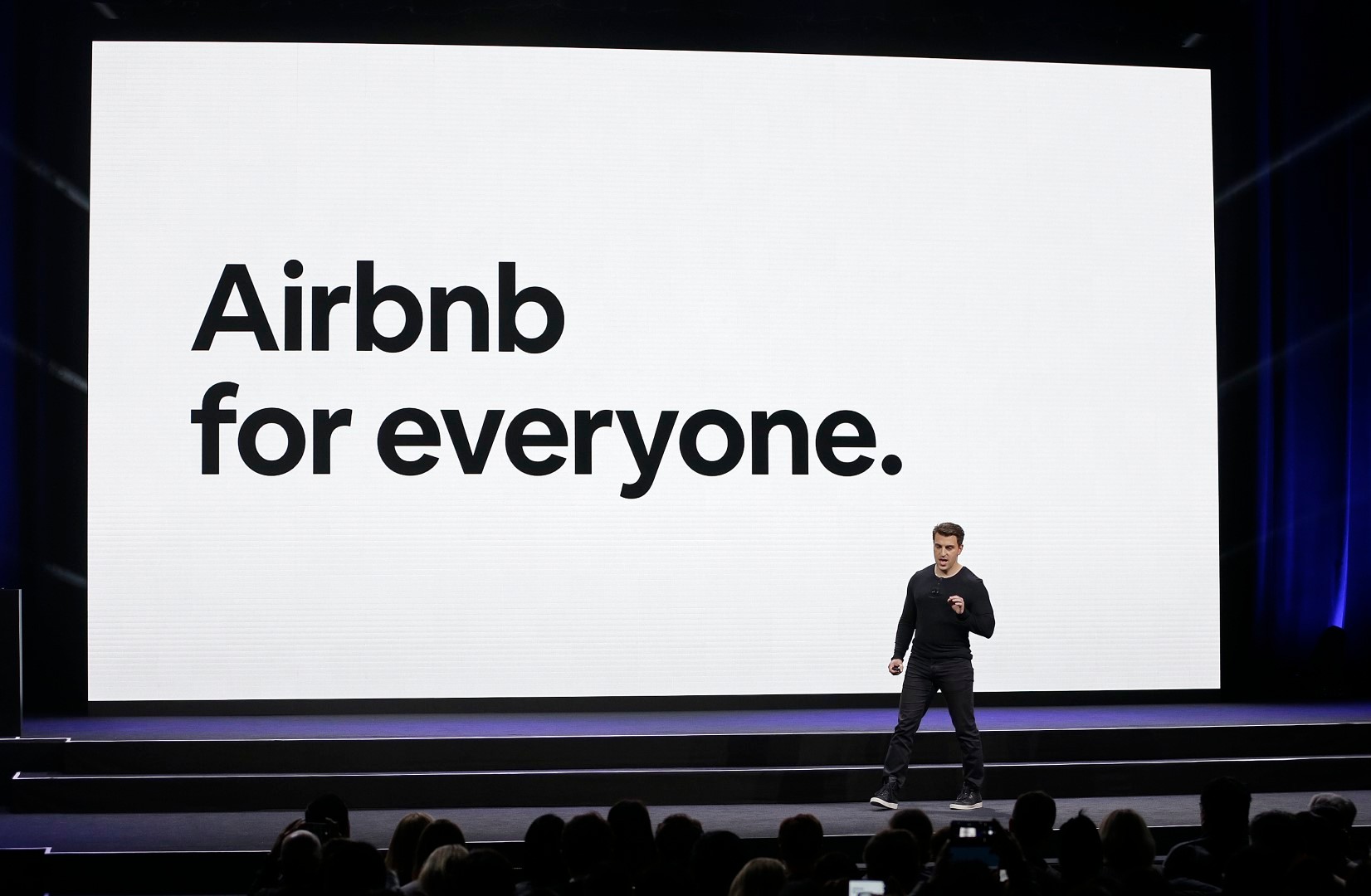 In this Feb. 22, 2018, file photo, Airbnb co-founder and CEO Brian Chesky speaks during an event in San Francisco. (AP Photo)

In one corner are the 15 leading Olympic sponsors, many household names like Airbnb, Coca-Cola, Visa, Toyota, Samsung, and General Electric. Together they pay at least $1 billion to the International Olympic Committee, and in the next four-year Olympic cycle the payments could reach $2 billion.

They are joined by Beijing’s 2022 Winter Olympics, which opens in just under a year. Sponsors want the Olympic connection, but they risk damaging their brand because of reported human-rights abuses against Muslim Uyghurs, Tibetans and other minorities in China.

In the other corner is a small core of international lawyers and activists. The have branded these the “Genocide Games” and are pressuring sponsors, the IOC, and world sports federations to acknowledge the issues.

Thousands of Olympic athletes are caught in the middle. For most, it’s a once-in-a-lifetime chance for fame and a medal. But they’re on their own. Those who speak out may be banned by Olympic bodies, dropped by sponsors, and threatened by the Chinese state.

“It’s not fair that these huge institutions who can speak out are going to leave it to the individual athletes to do this,” Blair McDougall, campaign director for the British-based Stop Uyghur Genocide, told the Associated Press. “The governing bodies could speak out, the sponsors, the IOC.”

Instead, there is silence.

“Once again athletes are being used as pawns,” said Rob Koehler, director general of Global Athlete, an advocacy group for Olympic athletes.

Human-rights groups have initially targeted Airbnb and CEO Brian Chesky. The World Uyghur Congress and other advocates for Uyghurs and Tibetans have previously called for moving the games, or some type of boycott.

“Airbnb describe themselves as a company that talks of having an ethos,” McDougall said. “So far they have ignored us.”

To grab attention, campaigners have designed a mock-ad linking Airbnb to the internment camps and Chinese President Xi Jinping.

Although sponsors account for about 18 percent of the IOC’s income, 73 percent comes from selling broadcast rights. The American network NBC accounts for about half of the broadcast income.

This will be Beijing’s second Olympics in 14 years, following the 2008 Summer Games that were supposed to improve human rights in China. These Olympics landed in China after several European bidders withdrew over costs and public opposition. The IOC was left with two choices: Beijing or Almaty, Kazakhstan. Beijing won in a narrow 44-40 vote.

“Our direct request of the sponsors is simple,” McDougall said. “Meet with the Uyghurs and people who have survived the network of camps so that you are not complicit in the use of the games in silencing the issue; in being used as a propaganda tool to distract from what’s happening.”

AP contacted the three Japan-based sponsors. Toyota’s reply was typical in regard to the internment of Uyghurs in northwestern China. Panasonic did not immediately respond, and Bridgestone sent a form letter from the IOC.

“As for the recent situation in Xinjiang, we are not in the position to comment on it,” Toyota said in a statement.

McDougall contacted the World Curling Federation, which initially responded by blocking him on social media. He said they have since lifted the block “but have gone silent.”

“They’ll be getting pressure not to be the ones who break the dam of silence,” McDougall said.

London-based human-rights lawyer Michael Polak filed a complaint with the IOC’s ethic commission over Beijing’s “breaches of the Olympic charter.” Instead of responding to his brief, the commission referred him to a statement from IOC President Thomas Bach.

The charter in Principle 6 under “Olympism,” prohibits discrimination “of any kind, such as race, color, sex, sexual orientation, language, religion, political or other opinion, national or social origin, property, birth or other status.”

Polak plans to follow up with Ban Ki-moon, the former United Nations secretary general and the chairman of the IOC ethics commission. The commission itself is not independent of the IOC, but Polak believes it should be.

The IOC has often repeated its position: it simply runs a sports events and “has neither the mandate nor the capability to change the laws or the political system of a sovereign country.”

IOC spokesman Mark Adams declined an Associated Press request to make Juan Antonio Samaranch Jr. available for an interview with a journalist and a human-rights lawyer. Samaranch leads IOC preparations for Beijing. In a recent interview with China’s state-run Xinhua news agency, he called progress for the games “truly remarkable.” Bach called the preparations “almost a miracle.” Neither has commented in public about the camps or the abuses or used the word “Uyghurs.”

Samaranch is the son for former IOC President Juan Antonio Samaranch. He also helps to run the Samaranch Foundation in China. The foundation says its purpose is to promote “Olympism.” One program listed on its website is dedicated to “safe driving and healthy sports” in Xinjiang, the region where the internment camps are located.

Polak said it’s impossible for the IOC to guarantee that elements used in the games--souvenirs, technology to time races, or clothing--were not produced by Uyghur “forced labor.”

“Because the supply chain is so muddy in China, it’s very likely that when an athlete crosses the finishing line, it will be the same technology that China uses to track Uyghurs,” Polak said.

Canada’s House of Commons on Monday voted 266-0 in a non-binding referendum that China is committing genocide against more than 1 million Uyghurs and called for the IOC to move the Olympics from Beijing.

U.S. Secretary of State Antony Blinken has said he believes genocide is being committed against the Uyghurs.

Polak pointed out that the United Nations Genocide Convention spells out much of the behavior taking place in China.

“Internationally there is no dispute that crimes against humanity are taking place,” Polak said. “Whether it amounts to genocide, there are some arguments. Although most people seem to now accept it does reach the stage of genocide. That’s in regard to preventing births and also separating children from families.”

Polak said having the games might inadvertently benefit the Uyghurs. Television coverage will highlight the rights abuse, and athletes speaking out could be critical. Athletes are pushing for that right with changes to the IOC’s so-called Rule 50.

“In some ways, the Olympics going ahead is almost better for the cause in terms of the world’s attention on what’s happening to the Uyghur people,” he said. “And not just the Uyghur people, but suppressed Christians, Tibetans and others.”