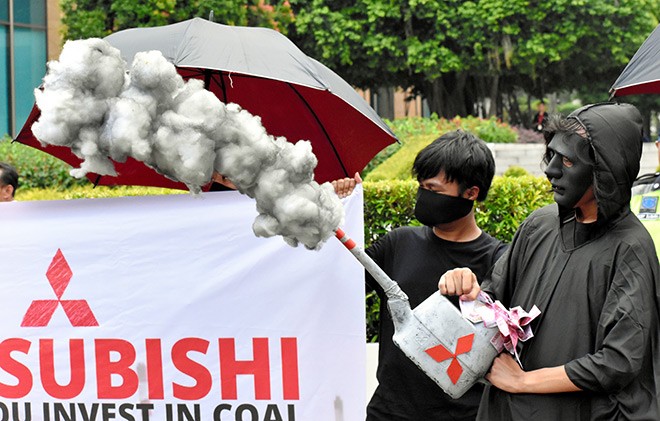 Protesters gather in front of the building housing the Jakarta base of Mitsubishi Corp. to oppose the company’s support for a coal-fired thermal power plant. (Rizki Akbar)

Mitsubishi Corp. has decided to pull out of the Vinh Tan 3 power plant in Vietnam, two sources familiar with the company’s thinking on the matter told Reuters, as it shifts away from carbon intensive businesses in the face of climate change.

Mitsubishi’s move to exit the estimated $2 billion project shows how willing Japanese companies and financiers are to drop their once-strong support for coal amid pressure from shareholders and activists.

Japan’s big banks regularly topped lending league tables for coal mines and power stations. But, in a little over a year, they have committed to ending their financing for the dirtiest fossil fuel, albeit over decades.

The Japanese trading house will pull out of the 2-gigawatt Vinh Tan 3 project, located in the southern province of Binh Thuan, because of climate targets, the sources who spoke on condition of anonymity said.

Mitsubishi has committed to reducing their investment in coal power to keep in line with international climate goals, according to its environmental statement, which a company spokesman pointed to in response to questions on Vinh Tan 3. He declined to comment on that particular project.

The Japanese trading house also has a stake in the Vung Ang 2 coal station being built in the central province of Ha Tinh, which is more widely known due to the focus on that project by environmental and other groups as well as investors.

Mitsubishi is a sponsor of the project through a joint venture with Hong Kong’s CLP Holdings where they have a 49 percent stake. Electricity of Vietnam Group has a 29 percent stake with Thai Bin Duong Group holding the remainder, according to Market Forces. Operations were due to start around 2024.

Vietnam is likely to shift away from a large rollout of coal power as renewables investments start to take hold, analysts have said.