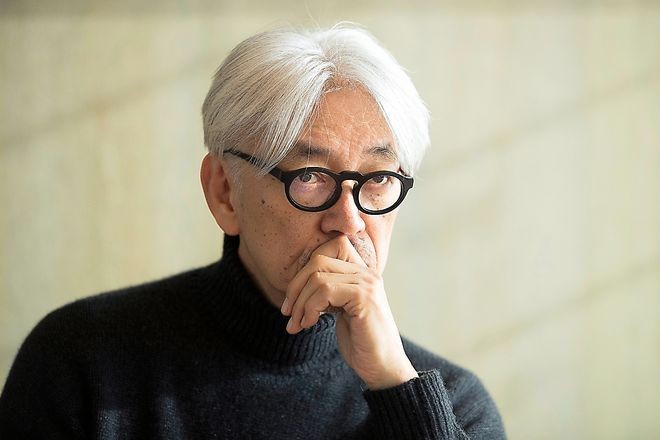 Composer Ryuichi Sakamoto said artists should serve as the “canary in the coal mine” that alerts the public to dangers early.

The world-famous artist was involved in the anti-nuclear campaign even before the atomic crisis began unfolding at Tokyo Electric Power Co.’s Fukushima No. 1 plant on March 11, 2011.

Born in 1952 in Tokyo, Sakamoto started the Yellow Magic Orchestra (YMO) band in 1978 and co-starred in the 1983 film “Merry Christmas, Mr. Lawrence,” scoring it as well.

In 1988, for his work in “The Last Emperor,” Sakamoto became the first Japanese to win the Academy Award for Best Original Score. He relocated to New York City in 1990.

He recently agreed to be interviewed by The Asahi Shimbun, doing so, he said, because he believes “as an independent professional belonging to no organization" he has "a responsibility to raise my voice.”

His words and actions bear him out. Sakamoto is well known as never hesitating to speak out on nuclear power, global warming and other issues.

The artist has actively been speaking publicly about the environment and peace, and calls for a world free from atomic weaponry or nuclear plants. In the interview, Sakamoto, discussing the Fukushima nuclear disaster, opined that “the nuclear accident has not ended at all.”

Q: Was the nuclear plant accident shocking even for you?

Sakamoto: I could not believe it. I had not imagined as many as three (reactor buildings) would explode. Those from our generation have never-fading memories of the 1986 nuclear disaster in Chernobyl in the Soviet Union, but a similar event happened in my own country.

Though nearly 10 years have passed since, the actual conditions of melted nuclear fuel have yet to be determined. Dispatched robots reportedly break down quickly due to the strong radiation levels. This is a human tragedy.

Q: At the time of the accident, you were staying in Tokyo for a recording. How did you react?

Sakamoto: Driven by fears of the risks, I rushed to a pharmacy to buy an iodine agent (used to protect the thyroid gland) but found none there. I contacted a doctor who is an acquaintance of mine and heard the government had bought it all up.

So, I thought we should go west for evacuation first of all, and contacted hotels in the Kansai and Kyushu regions but no rooms were available then. I believed I was a little more knowledgeable about nuclear power than ordinary people, but (the knowledge proved to be nothing).

When the reactors exploded, the wind blew toward the Pacific fortunately, carrying most radioactive substances to the Pacific side. But there was a possibility that tens of millions of people in and outside the Tokyo metropolitan area would be forced to flee like in a scenario imagined by the then administration of the Democratic Party of Japan.

Q: Did you feel strong regret given that you had engaged in the anti-nuclear movement before the accident?

Sakamoto: There were no fewer than 54 reactors in the country, which is home to so many earthquakes. The accident may have been meant to occur. My regret is about my having failed to stop them.

Damage caused by a nuclear accident cannot be compared to that from car and aircraft accidents. It is really horrific that only a single accident could cause damage to tens of millions of people.

Measures following the accident take dozens to hundreds of years. Spent nuclear fuel continues to be generated even without additional accidents, and there are no places to store it. I cannot understand why such a risky technology is used.

It might be forgivable if there were no other ways (to generate power). But in the long term, taking advantage of unlimited solar power is the most reasonable.

Q: Why do you think Japan cannot give up nuclear power?

Sakamoto: Once they start running, people in this country often cannot stop until all of them fall off the cliff together. The most famous example of this, as everyone knows, is the Pacific War.

Thinking reasonably, they would have given up as soon as they realized they couldn't win. Thus, I guess the United States could not figure out why Japanese soldiers staged reckless attacks with bamboo spears against enemies. I feel the same problem lies beneath the nuclear policy.

Fewer political campaigns had been run by citizens for 40 years in Japan after the series of demonstrations in 1970 (at a time when there was nationwide opposition to the Japan-U.S. Security Treaty).

But following the nuclear disaster, many people showed up in front of the Diet building to call for nuclear abolition every Friday. I repeatedly went there while I was staying in Japan.

The movement quickly lost momentum, though, after the issue of the ownership of the Senkaku Islands (controlled by Japan but claimed by Beijing) captured attention in 2012. The authorities might have tried to turn citizens’ eyes to the problem.

Q: Do you think the “nuclear village” comprised of utilities and reactor makers benefiting from nuclear power is behind the issue?

Sakamoto: I do not think use of the word “village,” such as in “nuclear village,” is appropriate. The community is almost as huge as the state itself.

However, I do think it will one day collapse. The Berlin Wall abruptly collapsed one day. Japan’s basic energy source was coal from the Meiji Era (1868-1912) to a certain point in the Showa Era (1926-1989) but was suddenly replaced by oil. The change could not be avoided even though large conflicts struck the Mitsui Miike coal mine and elsewhere.

Afterward, nuclear power grew as a large industry to supply energy in order to support the state, but still, never say never. The entity called the “nuclear village” will collapse someday.

The nuclear power industry is in decline from a global perspective. A nuclear plant was shut down in Massachusetts in the northeastern United States based on the argument that its profitability was not enough compared with costs, and a large-scale offshore wind power generating facility is emerging to substitute for it (as a new energy source).

The point is whether one “should die with nuclear power.” This is what is happening in other parts of the world.

Q: What's your opinion about the fact that sites to keep spent nuclear fuel are difficult to find all over the world?

Sakamoto: Launching it into outer space on a rocket in a bundle would be the best solution, but I heard it is impossible in financial terms. So we must seek places on Earth. The Onkalo final disposal repository in Finland, which former Prime Minister Junichiro Koizumi visited, is supposed to store fuel underground for 100,000 years (so radiation levels will drop significantly for safety).

There are some substances with a much longer half-life--the time needed for the amount of radioactivity to be reduced by half. Even after mankind goes extinct, some living creatures will remain. Leaving the waste is committing a crime against them.

This is the crime of mankind in the 20th century. Though we must take responsibility for our own actions, we do not know what to do. So, we simply bury it for the time being. How childish that idea is.

Q: What do you think of the two Hokkaido municipalities that have come forward in document screening to host a highly radioactive waste storage site deriving from spent nuclear fuel likely in order to get huge subsidies?

Sakamoto: I have heard the Seto Inland Sea did not exist 20,000 years ago. No one knows whether the Japanese archipelago as it currently is will exist 10,000 years from now. Because of that, we should not have done something (nuclear power production) for which we cannot take responsibility. How will we be able to compensate for it? I do not have an answer at hand like others do.

Q: Are you making proposals while expressing anger, grief and sorrow for Japan out of your affection for the country after relocating to the United States?

Sakamoto: Yes, I am. That is it. Nitobe Inazo (1862-1933) refers to “genuine patriotism” in his famous work “Bushido,” penned during the Meiji Era.

He means those who really love their own country should sincerely criticize the state. People who simply back authorities are something other than patriots. Those who take seriously problems of their hometown, country and Earth will feel anger toward things disturbing them. It's natural.

Q: Is it true your interest in environment and nuclear issues started nearly 30 years ago after you heard the 1992 speech delivered at the U.N. Earth Summit in Rio de Janeiro by a fourth-generation Japanese-Canadian girl named Severn Suzuki?

Sakamoto: She called on people not to continue destroying matters that they don't know how to mend. She was 12 at the time. She argued that doing so is bad in front of political leaders from across the globe.

I was really impressed. I started having an interest in environmental issues following the summit in Rio de Janeiro.

Q: I heard you then began working on the problem and encountered a story passed down by indigenous people in South America where a hummingbird carries drops of water to extinguish a mountain fire but is laughed at by other animals. The bird insists it is just doing what it can, and the story has been featured in a book. Why is the story important for you?

Sakamoto: The issue is massive, so one may feel doing something will not accomplish anything good. Despite that, one should not give up. I wanted to share the lesson and bought many books to be presented to others.

I believe I have since done as many things as I can, but the situation has been worsening continuously. Hmm, the problem is tough.

Q: Do you think the recent drastic decrease in renewable energy production costs will prove helpful in mitigating global warming?

Sakamoto: They have declined, actually, but I have no idea about the future. Global warming has further accelerated. Due to that, forest fires and droughts will occur on a grand scale. I fear that will finally lead to a global food crisis. Sooner or later, that will come.

We would not be in time (to prevent the crisis) if we allow things to go on this way. Not being in time means our children, grandchildren or the next generation will face serious difficulties. Of course, I do not want that to happen. It is terrifying. This thought makes me frightened.

Q: Why did you compose the music for “Minamata"? The film starring Johnny Depp to be released this year in many countries centered around U.S. photographer Eugene Smith, who alerted people around the world to Minamata disease.

Sakamoto: Before accepting the offer, I patiently asked the American director why a U.S. citizen would now make a film themed on Minamata disease. (The director said) the nuclear accident in Fukushima played a large part. He said the structures of the problems were the same.

The Minamata issue started before the war but was covered up on many occasions. Those in vulnerable positions are always sacrificed. He wanted to cast a spotlight on Minamata again to raise the issue.

Q: Why did you decide to be interviewed?

Sakamoto: The accident at Tokyo Electric Power Co.’s Fukushima No. 1 nuclear power plant hasn't ended at all. Though 10 years have passed, melted fuel must be cooled every second, adding to contaminated water. The accident is still far from resolved, but people are heading toward the Tokyo Olympics frivolously. This is out of the question.

People currently pay attention to the novel coronavirus amid the pandemic, and I think it can never be overemphasized no matter how many times I repeat that the accident is not over at all to coincide with the disaster’s 10th anniversary on March 11, 2021.

(This interview was conducted by Atsushi Komori.)