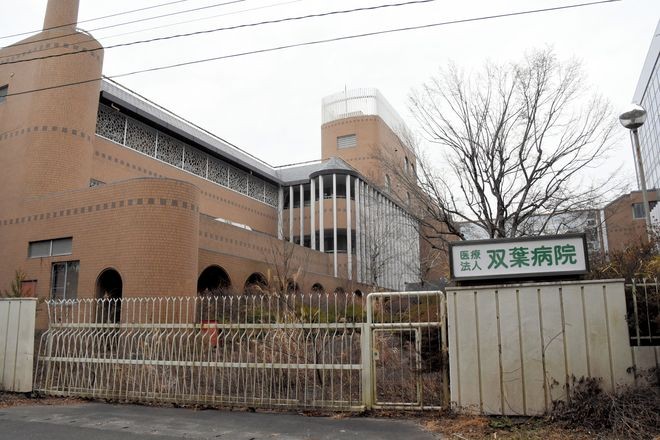 The area behind a barrier at the east ward of the Futaba Hospital in Okuma, Fukushima Prefecture, is overgrown with weeds on Jan. 23. (Taro Kotegawa)

OKUMA, Fukushima Prefecture--Despite an unfolding nuclear disaster, nurses at nearby Futaba Hospital continued to work diligently, even when it meant changing patients' diapers and plastic bags for intravenous drips by flashlight and candle light, after the power supply was cut.

While they waited to be rescued, large swathes of Fukushima Prefecture were being enveloped by radioactive substances spewed out of the crippled Fukushima No. 1 nuclear power plant following a triple meltdown triggered by the March 11, 2011, Great East Japan Earthquake and tsunami.

Dozens of elderly hospital patients died over the next few days, not from direct radiation exposure, but from a poorly executed evacuation operation.

At the time of the disaster, 436 patients and residents were in the care of Futaba Hospital and an affiliated health care facility close by for elderly people.

Emergency rescue operations were hampered by a hydrogen explosion at a reactor building the following day. Evacuating everyone from the two facilities in the aftermath of the crisis took five days, during which time 50 or so patients died.

Then, as now, pressing questions remain. Why weren't there more survivors? Why did so many people die during the evacuation process?

A 28-year-old Asahi Shimbun reporter visited the site for answers.

Futaba Hospital, the largest such facility in the Okuma, which cohosts the nuclear plant operated by Tokyo Electric Power Co., was equipped with 350 beds, mainly for its psychiatric department. It is situated 4.5 kilometers from the nuclear plant.

The medical center is in a designated “difficult-to-return zone,” where radiation levels are still so high that entry is severely restricted. Those who need to visit must first gain permission from Okuma town authorities and wear leased protection suits equipped with dosimeters.

A male guide who is a town resident drove the reporter to Futaba Hospital. Its iron front gate still remains locked after all these years. The car had to pass through a barricade and travel 200 meters on a byway to reach the six-story, tile-walled building hidden behind a thicket.

Peering through a window, the reporter saw sheets and plastic bottles laying scattered inside the building. Silence reigned, except for the rustle of the protective gear and labored breathing because of the face mask.

The trip to Futaba Hospital was inspired by unforgettable scenes that transpired at the end of a criminal trial at the Tokyo District Court on Sept. 19, 2019.

Three former executive officers of TEPCO indicted on charges of professional negligence resulting in the deaths of patients exposed to extremely harsh conditions during the evacuation process were all found not guilty.

Bereaved families of the patients who gathered in front of the court for the ruling were seen wailing and screaming with anger at the decision.

Efforts to clarify what happened at the hospital over those crucial five days have shed little light on what happened until now. Former staff members and others who were involved have preferred to remain silent out of “consideration” to the relatives of victims.

But Kazue Kamogawa, who served as vice director of the hospital’s nursing department at the time, finally agreed to an interview.

Kamogawa, 66, started out by saying she had rejected all overtures for interviews over the past several years.

“But then I started thinking I want to give myself a sense of closure as 10 years have passed since then,” she said.

Kamogawa recalled that she and other staffers had to improvise when caring for the patients because the power and water supply was knocked out by the earthquake.

“We did not think of the nuclear power plant,” she added.

The situation changed when the hospital tuned in to an emergency disaster radio broadcast issued by town authorities that night. An evacuation order was issued for all areas within a radius of 3 kilometers of the plant.

The zone was expanded to 10 km the following morning, March 12. As the phones were not working, a hospital official headed to the town government office 800 meters away to seek assistance.

The medical center needed 100 stretchers for the evacuation. Buses were also needed to pick up patients from the hospital and ferry them to safety.

That afternoon, five buses dispatched by town authorities left Futaba Hospital with 209 patients, all of them only mildly incapacitated, along with staff members. The vehicles traveled through central Fukushima Prefecture and arrived at an affiliated hospital in Iwaki in the prefecture on March 13.

Five rescue operations were carried out through March 16. The 50 or so people who died were among those who were too ill to be accommodated in the first group of buses.

The late Ichiro Suzuki, director of Futaba Hospital, stayed at the medical center with 129 patients suffering from serious problems during the first round of evacuation, according to a central government research committee's report on the incident and other sources. Ninety-eight residents and two staff members remained at the affiliated care facility.

As Kamogawa was not permitted to return to the hospital due to the nuclear crisis, she headed for the Fukushima Prefecture-run Iwaki Koyo High School in Iwaki, where patients were transferred during the second round of evacuation on the evening of March 14.

“The moment I opened the door of a bus, there was a foul odor,” Kamogawa said, recalling that a patient had died in transit. “I would never have left the hospital if I had known that I would not be able to return.”

Tashiro found patients with intravenous drip needles out of place when he entered a second-group bus that had arrived at the school. Some patients were lying across seats.

“There was a strong smell of excrement because one patient's diaper had slipped out of place,” Tashiro said.

The spacious school gymnasium was equipped with six heaters, but that was not enough to keep the sick people warm. Makeshift diapers were made by cutting up classroom curtains.

The health condition of the patients began deteriorating quickly.

“We put flowers in vases beside the bodies,” Tashiro said.

That plants had been used for decoration for a graduation ceremony that was recently held.

“The flowers were originally for celebration, but we used them to console the souls of the dead,” Tashiro continued.

He said that members of the Self-Defense Forces, who assisted in the evacuation process, as well as prefectural government officials could not decide whether the sick people should remain at the school or be relocated to a medical center.

“People cannot move just as planned on paper,” Tashiro noted. “Evacuation strategies need to be developed with that in mind.”

Yoshinobu Ishii, 76, a resident of Kawauchi in Fukushima Prefecture, lost his 91-year-old mother, Ei, in the disaster. He picked up a file from the bookshelf at his home to display her death certificate.

“Even the date of her death is unknown,” said Ishii, pointing to a section that states she died “around March 14,” the day the bus carrying Ei arrived at Iwaki Koyo High School.

Ishii was reunited with Ei four days later among a “line of corpses covered in white sheets.” His tearful wife pressed her cheek against Ei’ as a final farewell.

“She (Ei) will never return even if I feel resentment at what happened,” said Ishii. “I know the hospital should not be blamed for her death, but I wanted the staff to attend her funeral to offer incense.”

Everything that happened went way beyond expectations, he added, and “makeshift evacuation plans proved totally useless.”

Ten years after the disaster, nuclear reactor operators are gradually resuming nationwide. The deserted Futaba Hospital is an enduring monument into whether lives can really be saved when a disaster of such proportions strikes.