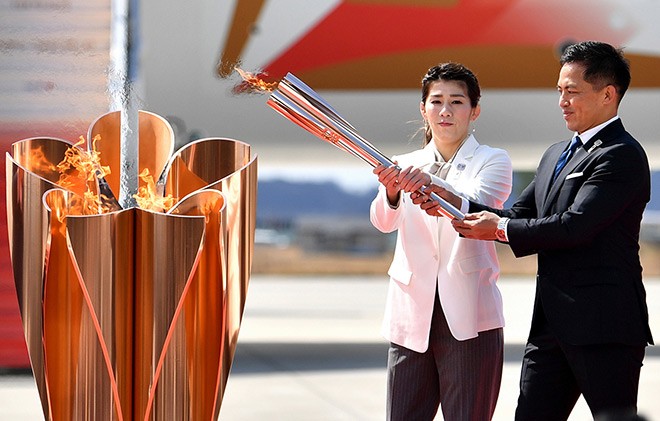 MATSUE--Shimane Governor Tatsuya Maruyama traveled 600 kilometers to Tokyo to demand additional pandemic-related support measures while his prefectural government issued a warning about canceling its portion of the Olympic torch relay.

Both the governor and his prefecture are seeking extra funding from Tokyo on the two issues.

Maruyama visited ministries and agencies in the capital on Feb. 25 in an attempt to gain additional support to ease the financial burden on his western prefecture caused by the COVID-19 pandemic.

He tried to meet key members of the Suga administration, such as Yasutoshi Nishimura, the government’s point man in dealing with the pandemic. But the governor was granted meetings only with vice ministers and lower-level officials, according to Shimane prefectural officials.

“I could not see a minister,” Maruyama said at a news conference. “I have not obtained an understanding from the central government.”

The governor handed a written request to the officials asking Tokyo to enhance financial support to restaurants and bars in Shimane and other prefectures that are showing progress in containing the spread of the novel coronavirus.

Shimane wants to provide cash relief to restaurants and bars to help them get through the pandemic.

“(But) Shimane’s financial foundation is weak to begin with and among the bottom of all prefectures,” a prefectural government official said. “Without additional support measures from the central government, we can’t do cash handouts on our own.”

Maruyama, a vocal critic of plans to hold the Tokyo Olympics in a place “with the lowest capacity to deal with the pandemic,” apparently focused on virus-related support measures at his meetings in Tokyo.

However, he reiterated his view of the Games at the news conference.

“If the situation continues, many restaurants and bars will go out of business at the end of March,” Maruyama said. “The high-risk Olympic Games should not be held.”

The governor recently took a swipe at Tokyo Olympic organizers by saying he was considering canceling the Olympic torch relay in Shimane Prefecture, citing the high infection risk.

“Maruyama seriously wants to raise the issue of relief payments with the central government, and making a statement about the torch relay is one way to do it,” a prefectural government official said.

The Shimane prefectural government sent a formal letter of demand to the Tokyo Organizing Committee of the Olympic and Paralympic Games, stating that some relay expenses imposed on the prefecture should be covered by the organizer.

If the organizer won’t take corrective action by the end of March, the prefectural government is expected to dissolve the agreement, a process required for the local government to cancel its part of the relay, sources said.

According to Shimane officials, the organizing committee has asked the prefecture to pay the costs of arranging vehicles on a remote island on the route and transporting torch bearers, as well as collecting torches after the relay.

The prefecture said in the letter that these costs are different from what was stated in the agreement.

The prefectural government has earmarked about 72 million yen ($678,150) for security costs and other expenses for the relay portion in the general account for the initial budget for fiscal 2021. It said it will cancel the budget allocation if it decides to scrap the torch relay.

Although Maruyama was denied meetings with Cabinet members in Tokyo, he did get close up and personal with political nemesis Wataru Takeshita, a veteran Lower House member representing Shimane Prefecture.

After their meeting in the capital, Takeshita told reporters that he said to the governor, “Responding to the pandemic is extremely important, but the Olympic torch relay is an entirely different topic.”

He also said the way Maruyama is “connecting the two doesn’t sound right.”

Takeshita also said he told Maruyama that decisions on the torch relay are “made by the organizing committee, all people in Japan, or the world, but not by a governor.”

When Maruyama on Feb. 17 said he was considering canceling the torch relay, Takeshita immediately called the statement “ill-considered” and said, “I’ll warn him.”

Maruyama won the 2019 governor’s election, defeating a candidate backed by Takeshita, a half-brother of Noboru Takeshita, a former prime minister.