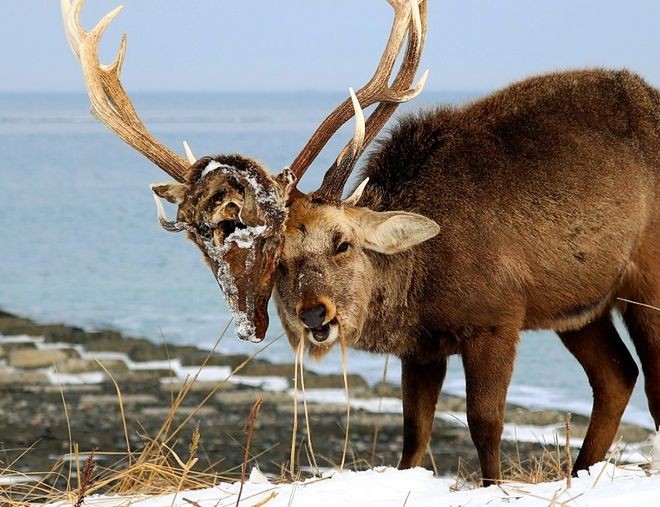 A wild stag sports the head and antlers of a dead rival as it grazes in undergrowth in Betsukai, Hokkaido. (Keiko Kanasugi)

BETSUKAI, Hokkaido--A wildlife photographer captured stunning shots of a wild stag sporting the decapitated head of a rival buck that got lodged in its antlers during a fight.

Images of the gory sight were taken Feb. 14 by Keiko Kanasugi, a nature photographer based in eastern Hokkaido, after she came across the animal grazing in undergrowth in the Notsuke Peninsula of this northern town.

A researcher in the ecology of Hokkaido sika deer--the species that inhabits these parts--said the two animals presumably butted heads during the autumn rutting season.

The researcher speculated that they were unable to separate because of their interlocking horns and that the rival eventually died.

As decay set in, the body rotted away but the head stayed on, and the survivor of the epic battle carried it through the winter, the researcher explained.

Sightings of the stag have caused quite an online stir since late last year.

The stag, in all likelihood, had to drag the body of its dead rival, which must have weighed more than 100 kilograms, while it foraged for food.

Cases have emerged of pairs of stags starving to death after their antlers became interlocked during confrontations.

“These scenes are so incredible,” the researcher said of the photos. “They reminded me of the tremendous vitality of the animal. The stag probably managed to survive precisely because it lives in the Notsuke Peninsula, where few external enemies exist, including humans.

Kanasugi said the scenes reminded her “of the harshness of nature and the heroism of the stag’s life.”

“With the rival's head stuck in its antlers, it’s as if he is wearing a trophy.”

If the deer is unable to shake off the severed head, it will have to survive until it sheds its antlers before spring.