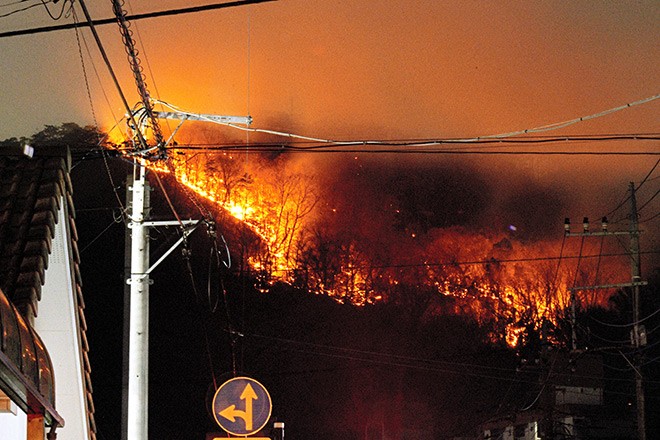 A wildfire rages just 100 meters from a house in Ashikaga, Tochigi Prefecture, on Feb. 26. (Atsuo Negishi)

ASHIKAGA, Tochigi Prefecture--Anime fans poured out their grief on social media after a small shrine associated with an online game featuring personified characters of legendary swords was destroyed in a spreading wildfire here.

The shrine, which was unmanned and located on the city's Mount Ryogaisan, was regarded by fans of “Token Ranbu” as a “holy site.”

Although the Shinto shrine did not have a particular name, local residents referred to it as either Mitakejinja or Ontakejinja. Its origin and history are not known, according to city officials.

The shrine won renown after the city’s museum held an exhibition in 2017 to display a samurai sword known as Yamanbagiri Kunihiro that features in Token Ranbu.

Designated by the state as an important cultural asset, the sword was depicted as one of the personified characters of the Token Ranbu online game.

Officials said 37,820 anime and sword fans converged on Ashikaga during the course of a month to catch a glimpse of the storied sword while it was on show.

Yamanbagiri Kunihiro is believed to have been crafted by Horikawa Kunihiro for the Nagao family, the ruler of the Ashikaga region, during the 16th-century Azuchi-Momoyama Period.

The Nagao family’s castle was situated in Mount Ryogaisan. The mountain and the surrounding area are designated by the city government as a cultural property.

The shrine struck a chord with the hordes of fans who made pilgrimages to the mountain.

When the owner of Japanese restaurant in the city that is frequented by anime devotees reported the loss of the shrine on Twitter, fans across the country posted comments to express their sadness.

“It was a small structure that resembled a roadside shrine, but it was a site that Ashikaga residents and fans both cherished,” the owner said. “I hope the shrine can be rebuilt some day. For now, I am waiting for the fire to be brought under control.”

The blaze, which started on Feb. 21, began to abate on Feb. 27 and appeared to no longer pose a threat to life or property. Nevertheless, the city government was expected to bring in 50 percent more firefighters from Feb. 28 to ensure it is put out.

“Right now, we are working to get the fire under control by March 1,” said Ashikaga Mayor Satoshi Izumi. “In a week or so, we are hoping to declare that the fire is fully contained.”