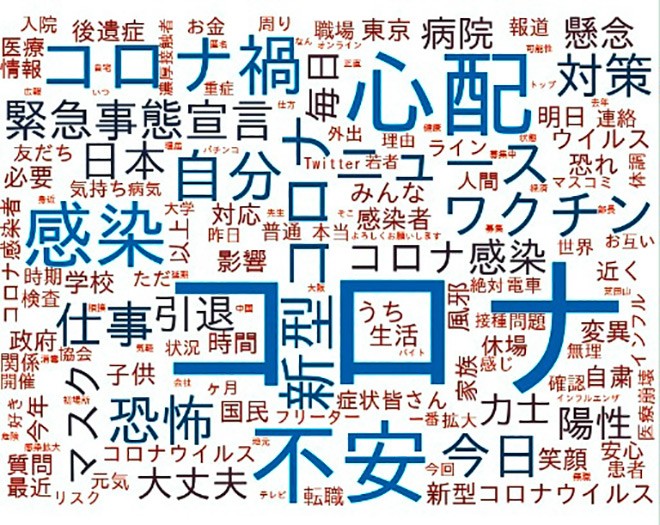 Japanese tweets about the novel coronavirus peaked after the death of comedian Ken Shimura and showed a heightened sense of crisis during the second state of emergency, analyses showed.

Using Brandwatch, a social media analysis tool, The Asahi Shimbun found that nearly 300 million tweets in Japanese about the novel coronavirus pandemic were written or retweeted between January 2020 and Feb. 25 this year by more than 20 million Twitter accounts.

The number of such posts started increasing after Jan. 16, 2020, when the first COVID-19 case was confirmed in Japan.

On March 30, the day after Shimura, 70, died from COVID-19, more than 3.4 million tweets were posted in Japanese, the largest daily figure ever in the country.

Many posts started using the hashtag, “Don’t lose to corona.” On April 17, 360,000 tweets contained that hashtag.

From July 10, the day the central government announced an early start of the Go To Travel tourism promotion campaign, until early August, 100,000 to 200,000 tweets that included “Go To” were posted a day, debating the pros and cons of the program.

Since November, when the third wave of the pandemic started raging, more than 100,000 tweets a day were posted that included both “corona” and “man-made disaster.” Many of the posts criticized the central government’s handling of the spread of the virus.

Such criticism coincided with a surge in the number of people around the world who frequently use the social media platform, according to U.S.-based Twitter Inc. The figure jumped to 192 million people between October and December 2020, 40 million people more per day compared with the same period the previous year.

A representative of Twitter Japan said the Japanese posts in the third wave “reflected a human community that seeks the best way to collect and organize information by tweeting.”

“During the first nationwide state of emergency last spring, people tried to mitigate the stress caused by an overwhelming lack of knowledge and information about the mystery virus by conversing with each other,” the representative said.

Under the second current state of emergency that started in January this year, people “already found their own answers on how to maintain good health and protect their own lives,” the representative said.

Based on what they have learned, people “seem to use Twitter to raise detailed questions about social problems,” the representative added.

The Asahi Shimbun obtained an analysis by JX Press Corp. and Twitter Japan on how the contents of tweets using the term “corona” changed when each state of emergency was issued.

The analysis randomly chose about 80,000 tweets from more than 81 million that were posted between a week before each state of emergency was declared and a week after each issuance.

During the first state of emergency, the percentage of “sad” and “scared” messages decreased by about 2 to 4 points from the time before the declaration.

At the same time, “relieved” and “pleased” messages increased by about 2 points. Some of the “relieved” tweets contained such terms as “smile” and “positive.”

A hashtag saying, “I want to do this and that once the pandemic is contained,” was also frequently used in these posts.

The analysis said many tweets at the time reflected people’s positive approach to overcoming the challenges of the pandemic.

But after the second state of emergency was issued, the ratio of “unwilling” and “scared” messages increased by about 2 to 3 points from before the declaration, while tweets categorized under “relieved” and “pleased” fell by about 1 to 5 points.

The “unwilling” messages contained such terms as “hospital” and “work.”

Many of the tweets in this period showed a sense of stagnation and frustration because bars and restaurants in the affected areas were closing at 8 p.m.

Some tweeters expressed concerns that hospital beds for COVID-19 patients were filling up and feared a collapse of the health care system. Others said they were worried about being infected with the virus.

“It is interesting that there were more positive messages under the first state of emergency and more negative messages under the second state of emergency,” said Kentaro Matsumoto at JX Press Corp. who was involved in the analysis. “As far as the voices on Twitter are concerned, the central government should have sent more messages to address people’s concrete concerns about things like the cooling off of the economy.”