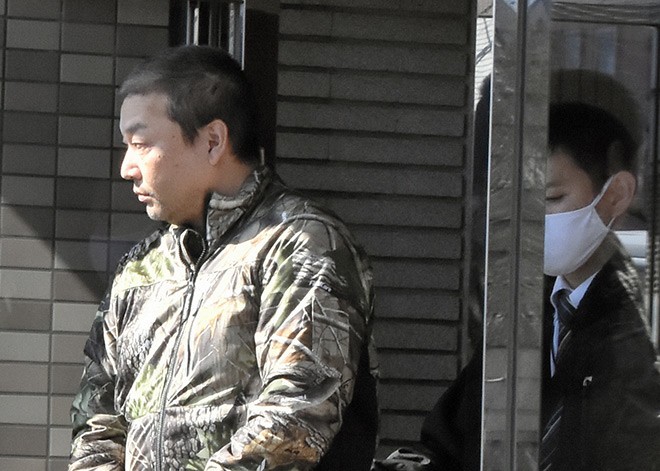 Jun Takahari was arrested on suspicion of murdering his wife in Tokyo’s Kunitachi on Feb. 28. (Emi Iwata)

A man whose wife was first thought to have died from falling or jumping from the balcony of their ninth floor apartment has been arrested on suspicion of causing her death.

The couple lived at the apartment in the capital’s Kunitachi city with their daughter, who had just turned 1 year old shortly before her mother's death.

Takahari called police at around 6:30 a.m. on Nov. 30, saying that Asaka was lying in the bushes below the balcony.

“My wife disappeared from the night of Nov. 29, and I looked down from the balcony and found out that she was lying down there,” he told police officers at the time.

An autopsy performed on Asaka, however, revealed she had been suffocated. Police now think Takahari strangled her, held her body up and dropped her off the balcony, according to sources, and are investigating the case further.

Police allege Takahari threw his wife off the balcony of the 12-story apartment building on the night of Nov. 29, 2020.

According to investigative sources, there was a chair on the balcony but no traces were found that Asaka had touched the balcony's handrails.

Police, after questioning people who knew her well, found no evidence that Asaka had been considering taking her own life. She seemed to have been enjoying raising her young daughter, those around her said.

Her mother also said that Asaka enjoyed nurturing her daughter but that the couple frequently quarreled.

Asaka, who married Takahari a few years ago, gave birth to their first daughter in November 2019.

The couple argued over their daily life and child-rearing, and once she left their house for a while, taking their child with her, her mother said.

But she told her mother she wanted to do her best to make things work since the couple had just moved to the Tokyo apartment.

Early in the evening of Nov. 29, her mother said Asaka texted her, saying, “Something might happen to me” using the Line messaging app.

When her mother asked her, “What could happen to you?” Asaka replied, “I don’t know what.” Her mother was unable to contact her after that.

Takahari, even after his wife's death, had continued working at his construction job as usual.