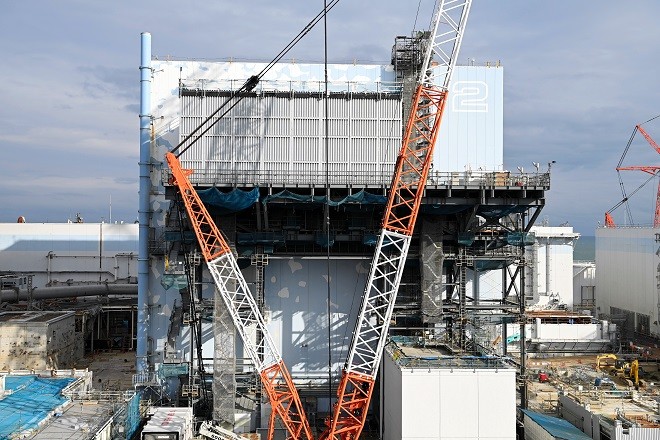 Work is under way to decommission the No. 2 reactor of the Fukushima No. 1 nuclear power plant on Feb. 1. (Shinnosuke Ito)

Delays have long been common in the decommissioning of the stricken Fukushima No. 1 nuclear power plant, but one recent postponement carried special significance.

Plant operator Tokyo Electric Power Co. in December said work to remove melted nuclear fuel from the three destroyed reactors would be delayed by about a year.

The retrieval process was supposed to start this year, marking a milestone in the formidable cleanup project.

It was one of the two paramount targets that the utility had refused to abandon despite its repeated tweaking of the decommissioning road map and the mountains of stumbling blocks it has faced.

The other target is the completion of the decommissioning project in “30 to 40 years,” a goal that was in doubt even in December 2011, when it was set by the government and TEPCO.

“We are chagrined to be unable to adhere to the road map,” Akira Ono, TEPCO’s chief decommissioning officer, said of the delay in the retrieval operation at a news conference on Dec. 24.

The novel coronavirus pandemic was a direct cause of the postponement.

An operation test of a robot that will be used for the retrieval was supposed to get under way in Britain, a country that is advanced in the field.

But the virus has hit Britain hard, and the test was delayed because of restrictions on people’s movement.

It is unclear when the robotic arm will be shipped to Japan.

The removal work is considered the most technically challenging part of the cleanup operation.

After the magnitude-9.0 Great East Japan Earthquake and tsunami knocked out power at the nuclear plant on March 11, 2011, the cooling system failed and nuclear fuel rods melted together with surrounding metal and solidified into corium, a lava-like substance.

The corium still emits extremely high levels of radiation. Even robots cannot come near it.

Ten years after the triple meltdown, TEPCO has yet to fully grasp such details as the exact location of the melted fuel within the reactors, its composition and hardness.

The utility initially planned to survey the debris through a remote-controlled operation before the start of the full retrieval process.

Under the plan, the British robotic arm measuring 22 meters long and weighing 4.6 tons would scrape several grams from the corium in the No. 2 reactor, where studies have seen more progress, and pack the small particles into a vacuum container.

But even taking images of the melted fuel has proved more arduous than expected.

Hajimu Yamana, head of Nuclear Damage Compensation and Decommissioning Facilitation Corp., a public-private sector body founded after the nuclear accident to provide technical support, brushed aside the one-year delay as “no big deal.”

Yamana, a professor emeritus of nuclear engineering at Kyoto University, also ruled out the need to push back the 2051 deadline.

“We cannot say at this stage that the completion in 40 years will be impossible,” he said. “We will work full force to achieve the 40-year target. Setting a demanding goal gives us a stronger motivation to want to achieve it.”

However, it takes about the same amount of time to decommission an accident-free reactor that passes its operating lifespan. TEPCO and the government are dealing with the world’s worst nuclear accident since the 1986 Chernobyl disaster.

On what basis did the government decide on that numerical target? And what conditions at the Fukushima No. 1 nuclear plant would warrant a declaration that the cleanup is complete?

The road map for decommissioning was based on a report by the Japan Atomic Energy Commission, which formulates the country’s nuclear policy, at the Cabinet Office.

But the commission’s report, dated Dec. 13, 2011, only said it would take more than 30 years to finish the decommissioning. It contained no reference to 40 years.

A member of an expert group in the commission recalled that some colleagues said it would take 50 to 60 years just to develop technology to decommission the crippled reactors. Others questioned the feasibility of dismantling the damaged reactor buildings.

“I was under the impression that the government at the time had no other option but to show a specific goal because evacuees from the affected communities were closely watching what the government would say,” the member said.

The reasoning behind the 40-year schedule is that 10 years are needed to prepare for the removal of nuclear debris, followed by another 10 years each to actually retrieve the melted fuel from the three reactors, according to Shunsuke Kondo, head of the commission and professor emeritus of nuclear engineering at the University of Tokyo.

“It is a gross understatement that the decommissioning will get done in 40 years at the earliest,” he said. “Politicians tend to undercut the numbers that we suggest.”

At a news conference on the road map in 2011, Goshi Hosono, minister in charge of the Fukushima nuclear disaster at the time, said the 30- to 40-year time frame for decommissioning was set after various technological possibilities were considered.

The target remained in place even after the Liberal Democratic Party and its junior coalition partner, Komeito, took power in 2012.

And no change was made in the overall schedule even after TEPCO’s announcement about the one-year delay in the fuel removal work.

“We will work to ensure that the stalled retrieval operation will not jeopardize the entire project,” industry minister Hiroshi Kajiyama said.

But with the cleanup progressing at a pace much slower than originally planned, some experts, including proponents of nuclear energy, are calling for discussions on the end state of decommissioning.

The government and TEPCO have yet to clarify the details of what they are aiming to accomplish through the decommissioning. Removing the corium is clearly one goal, but several other issues must also be resolved.

In a report released last July, a study group with the Atomic Energy Society of Japan, an association of academics, said that even if the reactor buildings are demolished in 30 years, the premises of the nuclear plant would remain unusable unless contaminated soil is removed together with the nuclear debris.

The group drew up two scenarios and projected the time needed and the amount of nuclear debris produced in the cleanup.

One scenario envisages a full cleanup, including the complete removal of the melted fuel, that would turn the premises into a decontaminated vacant lot. The group estimates that 100 years or so would be needed to finish this plan and involve the removal of 7.6 million tons of radioactive waste.

The other scenario is a partial cleanup. The underground floors of the reactor buildings would be preserved and sections of contaminated soil would be left to be managed for decades to come. An estimated 4.4 million tons of radioactive waste would be removed in this scenario.

The group also said the amount of debris and workers’ exposure to radiation would be further reduced if the dismantling of the reactor buildings was postponed by decades until radiation levels fall sufficiently.

Hiroshi Miyano, chairman of the study group and a former professor of nuclear engineering at Hosei University, said the report was produced to prevent the colossal project from derailing. It took group members four years to compile the report.

Citing TEPCO’s delay in safeguarding the nuclear plant from gigantic tsunami despite the government’s warning, Miyano said he feared that stalled discussions on the end state of decommissioning and what to do with the radioactive waste could doom the entire project.

He added that under an international consensus, the end state of decommissioning is set for reactors involved in major accidents.

TEPCO said it will consider the details while consulting with local leaders in Fukushima Prefecture, the central government and relevant entities. It has also not released information on the disposal of radioactive waste.

Together with 13 affected municipalities, the Fukushima prefectural government asked the central government in August 2016 to dispose the radioactive waste, including the melted fuel, outside the prefecture. They have since repeated the plea.

“If evacuees feel that the decommissioning is progressing, that will help them decide on whether to return home or not,” a prefectural government official said. “Our understanding of the complete decommissioning would be no radioactive waste left on the plant’s grounds.”

At a Feb. 2 news conference, Fukushima Governor Masao Uchibori did not give a direct answer when asked if he believed the decommissioning would be complete by 2051.

“I would like the central government and TEPCO to continue their efforts to achieve it,” he said.

The cost of the cleanup, initially estimated at 11 trillion yen ($101 billion), has ballooned to 21.5 trillion yen in the 10 years since the disaster started. The figure includes compensation payments and expenses for decontaminating the surrounding areas.

The decommissioning of a reactor that reaches its retirement age involves demolishing the reactor and the building housing it.

But the reactors at the Chernobyl nuclear plant in Ukraine and at Three Mile Island in the United States were not dismantled for more than 30 years after their accidents.

The No. 4 reactor of the Chernobyl nuclear plant that exploded and caught on fire in 1986 is now covered by a gigantic steel shelter completed in 2016.

The structure, which is designed to last for 100 years, seals in the deteriorating, concrete sarcophagus that was hastily built after the disaster to encase the reactor.

The only thing clear about plans for the No. 4 reactor is it will be managed for years to come.
In the 1979 accident of the Three Mile Island nuclear plant, a partial meltdown occurred at the No. 2 reactor.

Most of the debris inside the containment vessel had been removed by 1990. Workers will manage the site without dismantling the reactor building. Decommissioning is expected to be completed by around 2037.

(This story was compiled from reports by Yu Kotsubo, Yu Fujinami, Toru Furusho and Keitaro Fukuchi.)