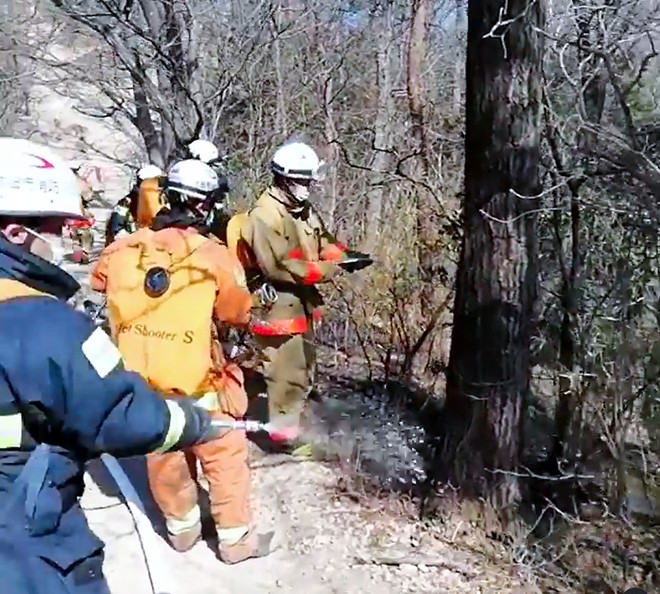 Firefighters continue to extinguish the remaining flames of a wildfire on a hiking trail leading to Mount Ryogaisan in Ashikaga, Tochigi Prefecture, on Feb. 28. (Provided by the Ashikaga city government)

ASHIKAGA, Tochigi Prefecture--A raging wildfire on a mountainside here that firefighters battled from the air and ground for nine days was finally brought under control on March 1, according to the city government.

The government lifted the evacuation advisory for 305 households in the path of the fire, which broke out on Feb. 21. Some 106 hectares have been burned, the city said.

The fire started in a mountain forest near Mount Ryogaisan, which rises 251 meters above sea level. Trails that run through Mount Ryogaisan, located close to the city center, and Mount Tenguyama are popular with hikers.

A dry air advisory had been in effect in Tochigi Prefecture since Feb. 16. Coupled with strong winds, the conditions helped the fire spread quickly.

The blaze approached homes in various parts of the area, prompting the city government to issue an evacuation advisory to wider areas.

Disaster response helicopters of the Self-Defense Forces and local governments dropped water on the blaze every day, while firefighters made a desperate effort to put out the fire from the ground to protect homes in its path.

The Ashikaga city government confirmed on the late afternoon of March 1 that the fire is unlikely to spread farther as it was deemed under control.

Firefighters on the ground will continue to extinguish the remaining flames to fully contain it.

One junior high school in the city resumed classes from March 1 after being temporarily closed during the spread of the fire.