Press secretary for Suga resigns amid wining and dining scandal 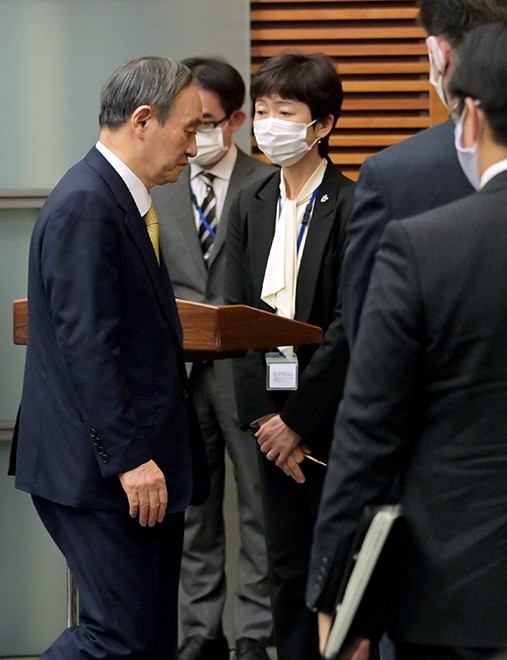 The Cabinet press secretary resigned on March 1, five days after saying she would stay on despite being at the center of a wining and dining scandal.

Makiko Yamada, citing health reasons for her decision, informed her superiors the previous day that she was in the hospital and required about two weeks to recover.

Prime Minister Yoshihide Suga met with reporters on March 1 and said, “I would like to express my apologies to Diet members and the public for the trouble caused through the resignation of the Cabinet public relations secretary at a very important time in Diet deliberations.”

The budget for fiscal 2021 was approved in the Lower House plenary session on March 2.

Yamada became embroiled in controversy after revelations she was treated to a dinner in November 2019 costing about 74,000 yen ($690) by Tohokushinsha Film Corp., which employs Suga’s eldest son, who also attended. Yamada was a high-ranking telecommunications ministry official at the time.

Suga had defended Yamada when the dinner featuring steak and seafood at a Tokyo restaurant was reported on Feb. 22. Yamada was the first woman named as Cabinet public relations secretary, and Suga wanted to show that his administration was providing greater advancement opportunities for women.

However, in addition to opposition lawmakers lambasting Yamada over the dinner, even ruling coalition lawmakers raised doubts about why Suga continued to stand by Yamada.

Suga told reporters on March 1 that Kazuhiro Sugita, a deputy chief Cabinet secretary, told him the previous day that Yamada had called from the hospital and indicated she wanted to resign.

Ruling coalition lawmakers speculated that Suga initially did not want Yamada to step down because of the ramifications for the other high-ranking telecommunications ministry bureaucrats who were also wined and dined by Tohokushinsha.

Those officials were disciplined through pay cuts and warnings, but if Yamada had quit immediately after the report surfaced the concern was that the other ministry officials would have had to resign as well.

A former Cabinet minister with the ruling Liberal Democratic Party said Suga likely did not want to lose experienced bureaucrats knowledgeable about broadcasting and communications policy at a time when the Diet was focusing on reform of Japan Broadcasting Corp. (NHK) and promoting digitalization policy.

But a number of LDP lawmakers said the Suga administration seemed to be out of touch with public sentiment. One said Yamada should have been pushed out when the first report surfaced, given how expensive the dinner she was treated to was.

Another said Suga was slow in making a decision regarding Yamada because the scandal involved his son. The LDP lawmaker, who has served in the Diet for the same number of years as Suga, said that connection likely clouded Suga’s decision-making.

Others said that Suga lacked a close associate who could provide advice about making decisions when faced with a difficult situation.

Suga fulfilled that role for his predecessor as prime minister, Shinzo Abe, when Suga held the post of chief Cabinet secretary. But Suga has no one to turn to for managing crisis situations, one veteran lawmaker said.