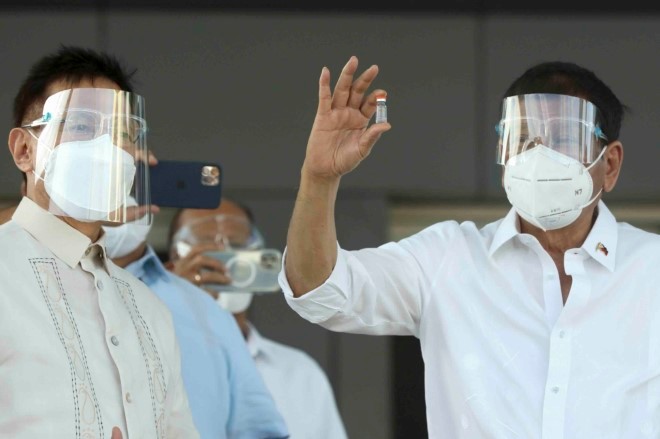 In this photo provided by the Malacanang Presidential Photographers Division, Philippine President Rodrigo Duterte, right, holds a vial containing the Sinovac vaccine from China as it arrives at the Villamor Air Base in Manila, Philippines on Feb. 28. (AP Photo)

MANILA--The Philippine president has dismissed his former ambassador to Brazil after she was seen on video physically abusing a Filipino member of her household staff.

President Rodrigo Duterte said Monday night he had approved a recommendation to fire Marichu Mauro, revoke her retirement benefits and disqualify her from public office for life. The decision comes as Duterte pushes a campaign against official abuses and corruption in his last full year in power.

Mauro was recalled from Brazil in October after the video, reportedly taken from security cameras in the ambassador’s residence in Brasilia and shown by a Brazilian news agency, showed a woman attacking somebody who appeared to be a housekeeper.

The Department of Foreign Affairs in Manila said at the time that the unidentified victim had returned to Philippines and that it was trying to reach her amid an investigation.

Mauro has not publicly commented on the allegations.

Duterte, whose six-year term ends next year, has been reading the names of government employees and officers implicated in graft and corruption in his TV appearances to highlight his campaign against abuses and irregularities.

But Duterte, a former government prosecutor who has threatened drug suspects with death and is known for his expletives-laden outbursts, has faced criticisms for abusive behavior himself. In his televised remarks Monday night, Duterte lashed out at Vice President Leni Robredo for criticizing the government’s handling of the coronavirus outbreak and vaccination campaign.

“You seem to have an angel face but a devilish mind,” Duterte said, calling Robredo’s stance “idiotic” in his rambling speech.

Fuming at what he said was Robredo’s reminder that health workers should be treated well, Duterte said: “You can die, but I will never abandon the frontliners and you do not need to really be redundant about it.”

Presidents and vice-presidents are elected separately in the Philippines, resulting in candidates from rival parties like Duterte and Robredo ending up in the country’s top leadership and often colliding on policies.

Robredo has been a leading critic of Duterte’s bloody anti-drugs crackdown, which has left thousands of mostly poor suspects dead and led to complaints of mass murder before the International Criminal Court.

Addressing erring government workers, Duterte threatened to slap and humiliate them. In a televised speech last week, he suggested that the hands of erring antinarcotics agents be smashed with a hammer to teach them a lesson.

“When I tell the secretary ‘leave us alone,’ you will get hit. I humiliate people, especially those who steal money from government,” Duterte said Monday.

Human rights lawyer Chel Diokno said publicly humiliating government employees and officials who are being prosecuted for graft and corruption by reading their names on TV in a shame campaign violates their right to a presumption of innocence, due process and fair trial. Victims of Duterte’s tongue-lashing could sue him for libel when he loses his immunity from lawsuits after his presidency, he said.

“It’s really improper and it’s ironic that he’s a lawyer and he should know better,” Diokno said.