Aichi residents shocked to find their names on recall petition 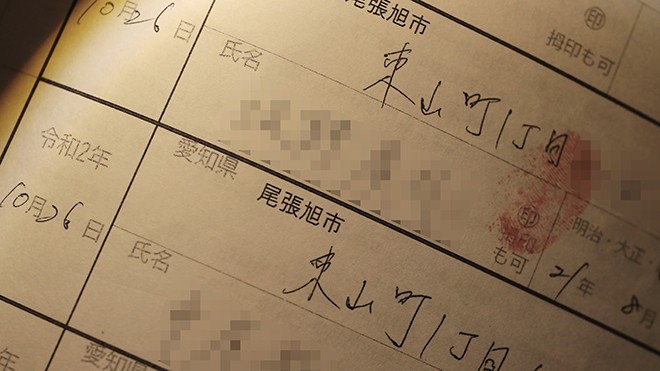 A 26-year-old resident of Toyota, Aichi Prefecture, was stunned and dismayed when he found his name on a recall petition against Aichi Governor Hideaki Omura.

“What in the world is this?” the man exclaimed.

He said, at first, it seemed “so far-fetched.”

The man made an information disclosure request to the city’s election administration commission regarding the recall campaign, and obtained a copy of the petition in December 2020.

Each sheet of the petition had room for 10 signatures. The man’s name was clearly handwritten eighth from the top on one of them, along with his address and date of birth. All the information was accurate, and it included a fingerprint.

“I know nothing about it,” he said. “This is not my handwriting.”

His handwriting on an application form for the information disclosure shows it is roundish and that he writes at a bit of an angle. The numbers were written in such an orderly manner that it was as if he used a typewriter.

But the handwriting on the petition looked like it was scribbled.

He has yet another convincing explanation for why the signature cannot be authentic: He is on the opposite end of the political spectrum.

The recall campaign was started by people upset at Omura’s support of a controversial art exhibit, which was part of the Aichi Triennale 2019, that intended to test the boundaries of freedom of expression.

The exhibit included a sculpture symbolizing wartime “comfort women” and a video that showed scenes of a portrait of Emperor Showa, the posthumous name of Emperor Hirohito, being burned. It triggered protests and threats of terrorist acts. The organizer was forced to shut down the exhibit in three days.

The resident of Toyota said he saw the exhibit as soon as it opened on Aug. 1, 2019.

“I found the idea behind the exhibit interesting,” the man said.

He found it intriguing enough that he joined a counterprotest by a citizen’s group that demanded the exhibit reopen.

But the controversy never died down. In the summer of 2020, Omura’s political enemies, such as Nagoya Mayor Takashi Kawamura and others known for believing in revisionist history, launched the petition to recall the governor.

This man was again working on the other side, though, handing out leaflets to his neighbors, asking them not to support the recall campaign.

There is no way he would have signed the petition, he said.

After November, he started noticing that people who volunteered in the recall campaign were warning on social media that some of the signatures should not be counted as valid.

That drove him to find out if his signature has been forged in the recall campaign.

His hunch proved right, but he has no idea how the campaign obtained his personal information.

“It’s creepy,” he said. “All of my family members are scared, too.”

Part of the signature list was not submitted to local election administration commissions in the end because campaign volunteers noted cases in which multiple signatures were forged by a single person.

Many of those cases were found in the city of Owariasahi.

The recall campaign volunteers who checked the list of signatures on Nov. 4, 2020, before submitting them to the city’s election administration commission concluded that some of the handwriting was identical across multiple entries.

The Asahi Shimbun has obtained a copy of the unsubmitted signature list.

The 42-page list contained the names, addresses and birthdates of 295 people. But there appeared to be only two different handwriting styles.

All the name entries were either missing a hanko seal or were accompanied by fingerprints.

The petition campaign closed on Oct. 25, but most of the name entries on the list were dated Oct. 26. Some dates were corrected to Oct. 25.

Seven residents in a particular district signed their names in a row.

CAN'T SPELL MY OWN NAME WRONG

A 24-year-old man saw the list and confirmed the information there was his.

“Wow, this is real. The information is correct,” he said--except that the man never signed the petition. “I was not involved in the petition. Who forged it? It is scary.”

“I swear this is not his handwriting,” she said.

She immediately called her son about the signature.

It remains inexplicable to the mother.

“How in the world did they get his name, where he lives and when he was born all correct? And why?”

Another woman in the district confirmed one of the names on the list is her 33-year-old older brother.

“But my brother lives out of the prefecture. He hasn’t been here for a while,” she said.

Whoever wrote his name made a critical mistake: One of the kanji characters in the man’s name was wrong.

“It’s totally bogus, isn’t it? There is no way he spells his own name wrong,” she said.

Leaders of the petition campaign have also said they are puzzled by the forgery scandal.

“My guess is that the criminal bought an original master list of names from a dealer in Tokyo,” Kawamura said on March 1.

Kawamura has admitted that he re-used a list in the Omura recall campaign containing more than 30,000 names his support group had previously used in the 2010 campaign to recall the Nagoya city assembly.

Kawamura said he was justified in doing so.

“It is OK to use it for a political activity,” he said.

Omura meanwhile pointed to the Nagoya mayor at a news conference for being unable to explain the falsified signatures.

“Mr. Kawamura and others bear a responsibility to investigate what has occurred and explain the findings,” Omura said. “To my disappointment, they have yet to offer a clear-cut explanation.”

(This article was written by Chieko Hara and senior staff writer Tomoaki Ito.)