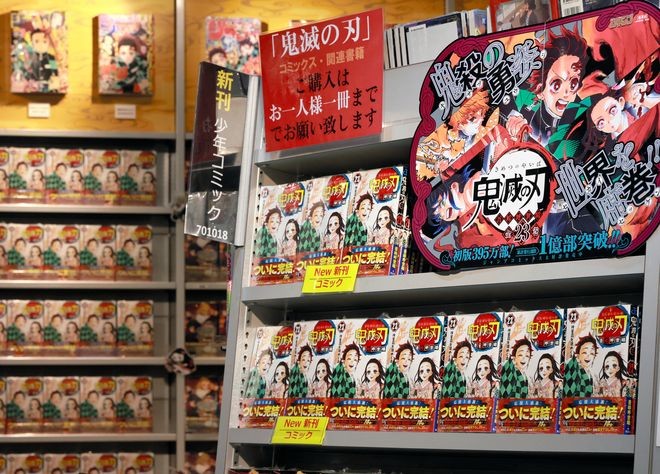 One section in a bookstore in Tokyo's Shibuya district is crammed with copies of the final 23rd volume of "Demon Slayer" on Dec. 4, 2020. (Asahi Shimbun file photo)

Time Magazine has included Koyoharu Gotoge, the author of the popular hit "Demon Slayer: Kimetsu no Yaiba" manga series, in its list of the world's 100 emerging leaders.

Other names gracing the list this year include Amanda Gorman, a young Black woman who recited an original poem during the inauguration of U.S. President Joe Biden, and Sanna Marin, who became the prime minister of Finland at age 34.

Time refers to Gotoge as the "mysterious author" of the manga because the artist's face and background information remain undisclosed.

It goes on to say that an animated series based on the manga is currently streaming on Netflix, while the animated feature film adaptation "Demon Slayer the Movie: Mugen Train," which became Japan's highest-grossing film of all time during the pandemic, is scheduled for release in North America later this year.

The magazine adds that "the reach of Gotoge's work promises to go even further."