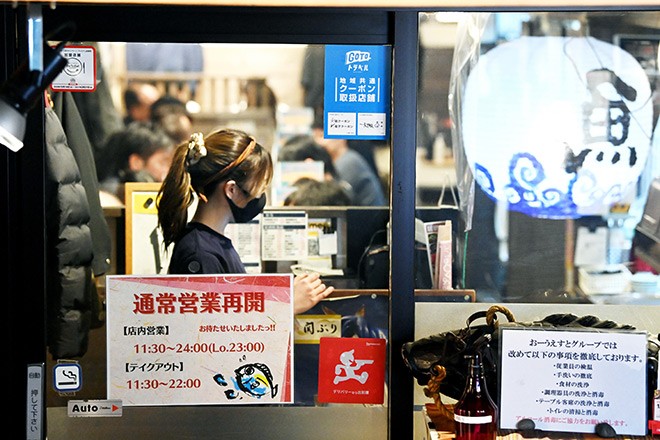 A sign in front of this “izakaya” pub in Suita, Osaka Prefecture, says it resumed normal operations on March 1 after early closure requests for bars and restaurants were lifted for the area. (Yoshinori Mizuno)

People are flocking back to entertainment districts outside Osaka now that the state of emergency is lifted and requests for bars and restaurants to close early have been withdrawn in some areas.

Streets in the city of Suita, Osaka Prefecture, were once again crowded in front of Esaka Station on Osaka Metro Co.’s Midosuji Line on March 1.

The city is among the areas no longer targeted by the prefecture's request for restaurants and bars to close early, and many company employees were seen heading to “izakaya” pubs from the station there even after 8 p.m.

A seafood restaurant in front of the station resumed operating until midnight for the first time in about three months.

“I was worried about a possible extension of the state of emergency,” said Ryotaro Onishi, who heads the eatery. “But I can’t be overjoyed at the lifting of the emergency as the situation remains uncertain.”

A 47-year-old company employee drinking alcohol with his two friends from Osaka city shortly after 9 p.m. at an izakaya said he is relieved that he can finally go out in the evening again.

“This is my first time drinking at a pub in a while,” the man said. “It’s like my life returned to normal. I am really enjoying it.”

The central government lifted the state of emergency on March 1, the second since last spring, for Osaka, Kyoto, Hyogo and three other prefectures a week earlier than scheduled. The measure, however, remains in place for Tokyo and three neighboring prefectures.

Eating and drinking establishments in Osaka, Kyoto and Hyogo prefectures had been asked to close by 8 p.m. for months, but they can now remain open until 9 p.m.

The early closure requests are still in effect across Kyoto and Hyogo, while Osaka Prefecture withdrew the request for its jurisdiction--except for Osaka city.

The number of new COVID-19 cases in Osaka city stopped rising a week after Nov. 27 last year, when Osaka Prefecture began asking establishments that serve alcohol in the city’s Kita and Chuo wards to close early.

But the number has remained roughly 1.2 times higher than the figure for the previous week outside the city.

Some voiced concerns about the measures ending at a meeting of the Osaka prefectural government’s expert panel on the pandemic. They worried that lifting the prefecture’s early closure request for areas other than the city could help spread infections in the non-targeted regions.

DATA SHOWS NIGHTTIME CROWDS ARE BACK

The number of crowds is increasing, especially during the evening, around train stations and entertainment districts in major cities, following the lifting of the state of emergency in the six prefectures, according to a data analysis by The Asahi Shimbun.

The uptick in the numbers raises concerns over a possible resurgence of infections.

The results showed that pedestrian traffic has significantly increased in many major cities compared to the smallest weekend crowds recorded since January, when the second state of emergency was issued.

The latest data was also higher than a week earlier in many areas.