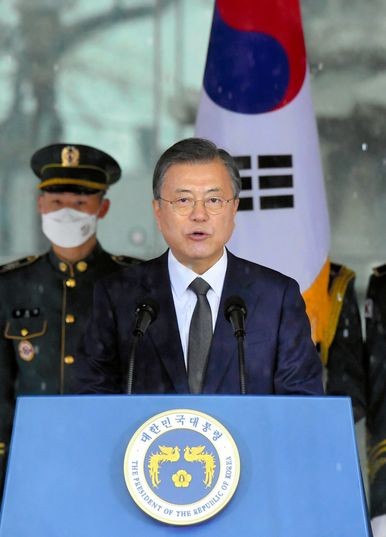 South Korean President Moon Jae-in delivers a speech at a ceremony in Seoul to mark the Independence Movement Day on March 1. (Provided by Dong-A Ilbo)

Resolving an emotional dispute over history between nations requires incessant efforts by the governments of both nations.

Specifically, each must strive for an early resolution by acting decisively and facing the past with total honesty and humility.

Amid continued deterioration of Japan-South Korea relations, President Moon Jae-in sent a conciliatory message to Japan in his speech at a ceremony to mark the March First Independence Movement Day, the anniversary of the 1919 uprising against Japanese colonial rule.

Avoiding any mention of "comfort women" and other hot-button issues, Moon declared his resolve to do everything possible to restore the honor and dignity of the victims and pledged "efforts for Korea-Japan cooperation and forward-looking development will not stop either."

He also noted that the bilateral cooperation will facilitate stability in northeast Asia and the trilateral Japan-South Korea-U.S. partnership.

Until now, Moon appeared wary of stressing the trilateral solidarity, out of consideration for North Korea and China. For this reason, his latest speech displayed a subtle yet definite shift toward a future-oriented course.

We hope he will back his words with action by formulating concrete plans for dealing with the latest historical issues and commencing talks with Japan at the earliest opportunity.

Moon expressed eagerness for improving Tokyo-Seoul relations in his New Year's news conference. And it was hoped that he would come up with settlement proposals with respect to a series of court verdicts that ordered Japan to pay compensation.

About six weeks have passed since, but unfortunately, no tangible progress has been made.

Cynics believe that Moon's comments were meant merely to deflect criticisms at home regarding his Japan policy, as well as to appear ready to mend fences with Japan as expected by the new administration of U.S. President Joe Biden.

If the cynics are correct, any fundamental resolution will simply remain out of reach.

A South Korean presidential election, scheduled for next year, will elect Moon's successor.

The Tokyo-Seoul dispute over history has hindered summits and high-level meetings, and Moon would not want to hand down this abnormal relationship to the incoming administration.

But there also are matters on which Tokyo must change.

South Korea and Japan had an altercation last week before the United Nations Human Rights Council.

South Korea brought up the comfort women issue as a "universal human rights issue," without mentioning Japan. But the Japanese side reacted vehemently, denouncing the South Korean move as "unacceptable" under the 2015 bilateral political agreement.

It is true that the agreement confirmed that both parties would refrain from criticizing each other before the United Nations or any international forum. But the agreement did not ban discussion per se of the comfort women, who were forced to provide sex to Japanese soldiers before and during World War II.

The Japanese reaction before the UNHRC not only came across as an attempt to dodge a historical fact, but also went against the spirit of the 1993 "Kono statement," released by then Chief Cabinet Secretary Yohei Kono, in which the Japanese government made its position clear.

It certainly didn't help prompt Seoul to make an objective decision, nor will it ever win the support of the international community.