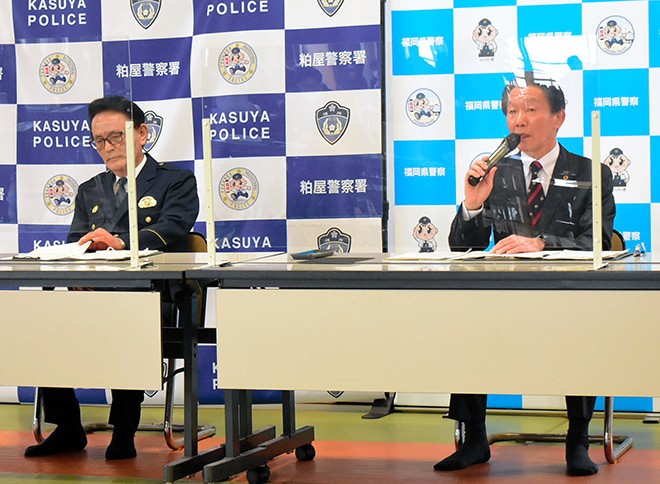 FUKUOKA--Two women in a "master-subordinate relationship" were arrested on March 2 here in connection with the starving death of one of the women's 5-year-old son, according to police.

The women are accused of conspiring with each other to make Ikari’s third-born son malnourished by cutting down the frequency of his meals and the amount of food he received.

Police said the practice started around August 2019 and continued until the boy died at an apartment where Ikari lived in Sasaguri in the prefecture on April 18, 2020.Ikari, unemployed, found her son unconscious and asked a third party to call for an ambulance.

When he was transported to a hospital, Shojiro looked extremely thin and weighed around 10 kilograms, about half the average weight for a 5-year-old boy.

According to investigative sources, the boy’s thymus became atrophic when he died, a sign that he was under severe stress likely caused by abuse.

Ikari told investigators that Akahori “sometimes hit Shojiro when he pushed back against her and did not obey what she told him to do.”

Based on Ikari’s statement, police are also investigating the allegation that Akahori had assaulted the boy both physically and mentally for a long time.

Ikari and Akahori became acquainted when their children attended the same kindergarten in April 2016.

Police said the unusual dependence relationship between the two women began with a manipulative lie, in which Akahori told Ikari that her husband was having an affair.

Ikari believed the lie, and the couple divorced in May 2019.

Akahori repeatedly told Ikari, “You have to maintain a simple lifestyle and practice frugal eating in order to win a lawsuit against your ex-husband,” police said.

Ikari at the time lived with her three sons, the oldest attending an elementary school.

Akahori, also unemployed, started meddling in Ikari’s family affairs, running the family’s household budgets and telling her how to raise her children.

Akahori gave precise instructions to Ikari on the amount of food to feed them.

“Ikari was under mind control,” an investigative source said.

Akahori regularly demanded money from Ikari for an “infidelity investigation on your former husband,” which she made up, among other things.

Ikari not only handed the livelihood protection subsidy and child care allowance she received to Akahori but also came up with extra cash by selling her car and borrowing from friends to give to the woman.

Ikari received a monthly income on welfare of around 200,000 yen. But Akahori took all the money.

Several times a week, Akahori handed the family some food, such as bread, rice and snacks.

Akahori spent the rest of the money on clothes and other things, police said.

Based on these facts, police have concluded that Akahori was the de facto manager of the family budget and therefore had a responsibility to protect Shojiro when he became frail.

Akahori has denied the charge and told investigators, “I had no involvement in the dietary management of the family.”

However, Ikari has admitted to the charge and told investigators, “I got conned into believing (Akahori). I couldn’t protect my (son) as his mother,” according to police.

A neighbor of Ikari's, suspecting child abuse, called police in February 2020. Police did not find any external injuries on Ikari's three children, but reported the case to a child consultation center.

(This article was written by Daichi Itakura and Tsubasa Yokoyama.)