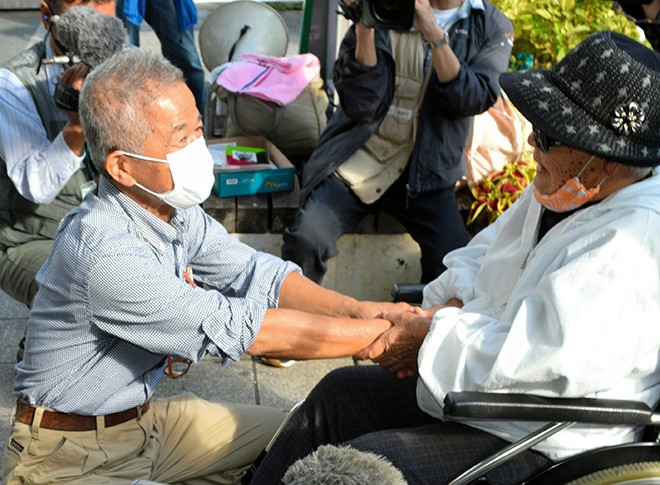 Takamatsu Gushiken, left, chats with Fumiko Shimabukuro, a survivor of the 1945 Battle of Okinawa, who came to show her support for him during his hunger strike near the Okinawa prefectural government building on March 1. (Mika Kuniyoshi)

NAHA--A 67-year-old man is staging a hunger strike here to stop fragments of remains of people killed in the 1945 Battle of Okinawa from being used in a project to build a U.S. military base.

Takamatsu Gushiken is appalled that the central government intends to procure landfill material from southern Okinawa, as he says it likely contains remains of those who died in the fighting mixed into it.

The government intends to use the soil to reclaim land in waters off the Henoko district of Nago to build a new U.S. base to take over the functions of U.S. Marine Corps Air Station Futenma in Ginowan. Both Nago and Ginowan are located in the prefecture.

Gushiken began his protest near the prefectural government building on March 1, demanding that the central government scrap its plan to procure the soil.

Fumiko Shimabukuro, 91, a survivor of the battle, came to see him that day to offer her moral support.

Gushiken has spent 40 years searching for the remains of those who died in the battle, and now heads a local volunteer group doing so.

He began the hunger strike to draw attention to the central government’s reclamation plan, which states that about 31.6 million cubic meters, or 70 percent of the soil that will be procured in the prefecture, can be collected from Itoman and Yaese in southern Okinawa.

Local civilians and Imperial Japanese Army troops perished by the thousands there after U.S. forces cornered them during the fighting.

Gushiken said there are caves in the south that have yet to be searched for recovery of human remains. He pointed to the possibility that dirt containing remains could be used in the base project if the central government’s plan was not stopped.

Gushiken hopes to spread the word of the plan beyond Okinawa.

“I want people on Japan's main islands to become aware that the use of soil from the prefecture’s south would be tantamount to defaming the dead,” he said.

He said he will continue with the hunger strike until March 6 if his health allows.