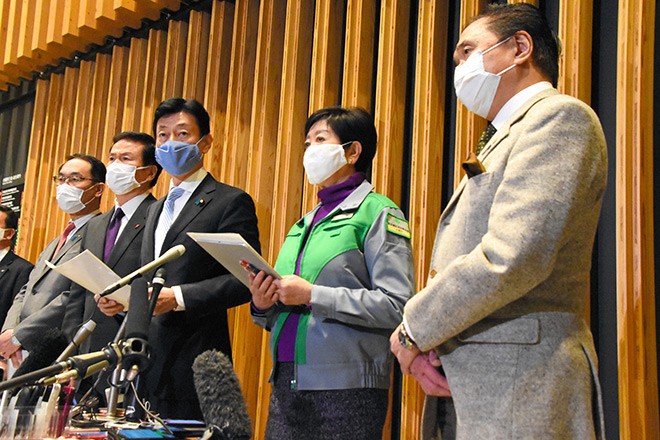 Yasutoshi Nishimura, center, who heads the central government's effort to deal with COVID-19, holds a news conference on Jan. 2 with the four governors of the greater Tokyo metropolitan area. (Asahi Shimbun file photo)

Prime Minister Yoshihide Suga has decided to extend the COVID-19 state of emergency for four prefectures in the Tokyo metropolitan area for two weeks beyond the March 7 deadline, several government sources said.

Tokyo Governor Yuriko Koike and her counterparts from Kanagawa, Saitama and Chiba prefectures have all warned that the pace of decline in new COVID-19 cases has slowed and that a resurgence in cases could be on the horizon.

The governors discussed the situation at an online meeting on the afternoon of March 3.

Suga has been waffling on whether he will lift the state of emergency for the four prefectures on March 7.

Although he has pointed to the reductions in new infections, he has also expressed caution about the continuing tight situation at medical care facilities.

A consensus has apparently been reached that any decision on the state of emergency would cover all four prefectures simultaneously, even though the central government’s six benchmarks used to determine the infection situation vary among the four prefectures.

The government lifted the state of emergency for six other prefectures on Feb. 28, but the Tokyo area governors have continued to express pessimism about the COVID-19 situation in their jurisdictions.

On March 2, Chiba Governor Kensaku Morita said it would be “extremely difficult” to lift the state of emergency on March 7, given the inconsistent pattern in new COVID-19 cases.

The previous day, Chiba Prefecture, which lies just east of the capital, recorded 128 new cases, a figure that was even higher than the tally for more densely populated Tokyo.

The benchmark regarding hospital bed usage for COVID-19 patients in Chiba Prefecture has also been hovering around the 50-percent level considered a sign the jurisdiction remains in the most serious stage 4 level in terms of the spreading of infections.

Morita also noted that the increase of community infections in his prefecture left open the risk of infection clusters at facilities such as retirement homes.

On Feb. 24, Chiba Prefecture issued its own warning about a new surge in infections after the average of new cases for a five-day period exceeded the figure for the previous week.

Saitama Governor Motohiro Ono on March 1 also said he was not confident the state of emergency could be lifted for his prefecture, north of Tokyo.

The hospital bed usage ratio has fallen under 50 percent, pushing Saitama out of stage 4 for that benchmark. But the figure remains above 40 percent, meaning it has still not moved out of the second most serious stage 3.

Koike also said on March 2 that a further request to thoroughly implement infection prevention measures would have to be made before the state of emergency could be lifted.

Kanagawa Prefecture, south of Tokyo, has fallen to stage two in five of the benchmarks, with hospital bed usage the only one at stage 3. Still, Kanagawa Governor Yuji Kuroiwa said the overall situation for the four prefectures remained at stage 4 for some benchmarks.