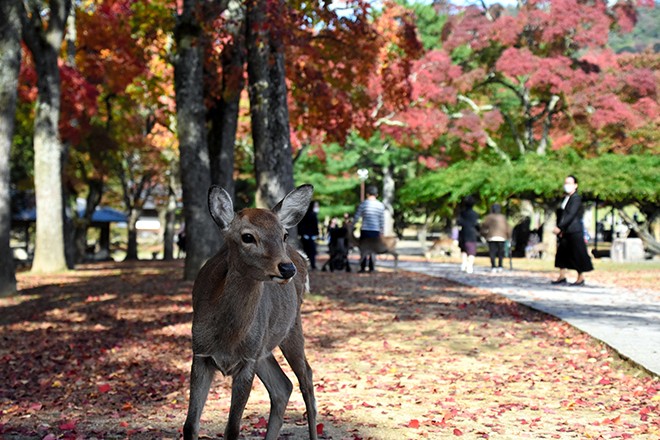 NARA--A man has been arrested here under suspicion of violating the Cultural Assets Preservation Law for killing a deer--God’s sacred messenger according to ancient myth--an act that once was a capital offense in Japan.

Nara prefectural police on March 2 arrested Hayato Yoshii, 23, a construction assistant in Matsusaka, Mie Prefecture, in connection with the death of a deer last month.

Police said sometime around Feb. 7, Yoshii smashed a sharp, thick object against the head of a doe estimated to be 11 years old, at Nara Park, a major tourist attraction in the city home to many deer.

Yoshii admitted to the charge and told investigators, “I was playing with the deer, then (she) dashed against my car.”

“I got angry,” Yoshii said, according to police.

“I see a deer, injured and not moving,” the man said.

Officers found the doe collapsed, bleeding from her head.

The Nara Deer Preservation Foundation in the city took in the deer, but she died on the same day.

Police said the doe died from the loss of blood caused by a frontal head injury.

Police said Yoshii told investigators, “I bludgeoned the deer with an ax with all my might, thinking, ‘I will kill you!’”

Wild deer in Nara Prefecture have been designated as a national natural treasure under the law since 1957.

Hiroyasu Takeda, who heads the prefectural government’s office that manages Nara Park, said their origin dates back about 1,250 years.

Legend has it that a god named Takemikazuchi-no-mikoto rode a white deer to the top of Mount Mikasa in the prefecture.

The god is enshrined at Kasuga Taisha shrine, which is within walking distance from the park.

There are about 1,300 wild deer roaming in and around the park today. Locals believe they are descendants of the white deer and consider them divine messengers, calling them "shinroku," or God's deer.

During the Edo Period, a person who killed a deer was punished by decapitation.

When a deer happened to die in front of a house, the resident would be ordered to pay a fine. To avoid punishment, people in the area woke up early so that they could quietly move a dead deer to the front of a neighbor’s home.

Takeda said members of his organization “have strengthened their patrols to protect the deer.”

“It is indeed regrettable that such a tragic incident occurred,” he lamented.

Takeda said the deer are “integral to the lives of people in Nara.”

“We do not even turn our heads when a deer passes by us. They are part of our daily life, and we co-exist with them,” Takeda said.

He said he hopes people from outside Nara also treat the deer with the same respect.

(This article was compiled from reports written by Miki Takenaka and Takumi Okada.)