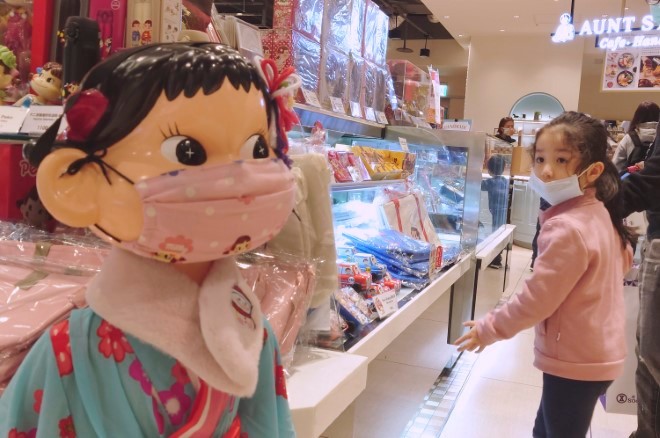 A girl wears a face mask to help curb the spread of the coronavirus and looks at a doll wearing the same at a department store in Taipei, Taiwan, on Feb. 27. (AP Photo)

TAIPEI--The first batch of COVID-19 vaccines arrived in Taiwan on Wednesday, the health minister said, adding the island is hoping to secure more vaccines as it prepares to begin its immunization campaign.

About 117,000 doses of the AstraZeneca Plc vaccines landed at Taipei’s main international airport in the morning, Chen Shih-chung told reporters. He declined to say when the shots will start being administered.

Chen said while the amount of vaccines that arrived only represented a “relatively small” number of what the island has ordered from AstraZeneca, the shipment marked a “very meaningful” event for Taiwan’s health workers.

“Every country is stockpiling. We of course welcome what was sent to us,” Chen said, adding Taiwan is working to get more imported vaccines.

In December, Taiwan said it had agreed to buy almost 20 million vaccine doses, including 10 million from AstraZeneca. It is also getting 200,000 AstraZeneca vaccines via global vaccine initiative COVAX.

Taiwan is also getting 5 million doses from U.S. drugmaker Moderna Inc., and the government said last week it could begin administering its home-made COVID-19 vaccines as early as July.

The government plans to vaccinate frontline health and quarantine workers first, and aims eventually to get up to 45 million vaccine doses for its 23 million people.

Taiwan has kept the pandemic well under control thanks to early and effective prevention, including tough border controls and quarantine measures, with only 23 active cases being treated in hospital.

While Taiwan has been keen to start vaccinations, officials have said that with such a low rate of infection there was not the same urgency to getting the shots as other countries with a far higher toll.

Germany’s BioNTech SE has said it plans to provide COVID-19 vaccines to Taiwan, after the island complained the firm pulled out of a deal to sell it 5 million doses at the last minute, possibly due to pressure from China, which claims Taiwan as its own.