MOMENTS IN TIME: Son slowly comes to terms with his mother’s death 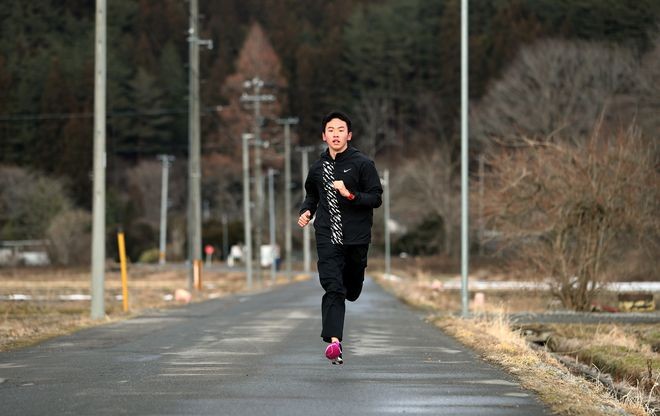 Feb. 6, 2021: Sora Sasaki out on a run near his home in Yamada, Iwate Prefecture. He is a middle-distance runner for 800- and 1,500-meter races at the track and field club of the local high school he attends. (Shingo Kuzutani)

Editor’s note: This is the third of a four-part series retracing the lives of four families over the decade following the March 2011 Great East Japan Earthquake and tsunami, mainly through photos that depict a range of human emotions as bereaved family members and other survivors tried to comfort each other and rebuild their lives.

When an Asahi Shimbun photographer met 6-year-old Sora Sasaki in May 2011, the boy had recently lost his mother in the tsunami that ravaged coastal areas of northeastern Tohoku region after the Great East Japan Earthquake struck.

His mother, Kanako, 33, moved back to her hometown of Yamada, Iwate Prefecture, three years earlier from Saitama Prefecture after getting divorced. Kanako raised Sora while working as a sales representative at an insurance company.

His grandfather, Masao, 70, and grandmother, Etsuko, 69, were puzzled to hear Sora ask whether “I will be able to see mom again if I am washed away by tsunami.”

Lonely and distraught, Sora would cry out loudly at night asking, “Is it really true mom will never return?”

In July, Masao and other relatives completed procedures to register Kanako’s death and Sora bid his mother a farewell with fireworks on the last day of the Bon festival on Aug. 16.

When told by Masao, “your mommy will now return to heaven because the Bon festival is over,” Sora bid “goodbye” in a tight voice as white smoke from the fireworks dissipated into the night sky.

Kanako’s remains were finally returned to the family in September after a positive identification was made through DNA analysis. Sora said, "Mom has come home," and broke down in tears.

When her ashes were interred in the family's burial plot in March the following year, three shards of her bones were kept at Sora’s home. He showed them off when the Asahi photographer visited his house, and asked Etsuko whether “all people will be like this after they die.”

On the 10th anniversary of the 3/11 disaster that claimed his mother's life, Sora, now 16, attends a local high school that he entered last spring. He joined the track and field club of the school and has become a middle-distance runner.

Asked about Kanako, Sora says in a strong voice he “at times recalls my mother.” Watching a close friend being fussed over by his mother at his junior high school’s graduation ritual reminded him of Kanako.

A “well-grown” Sora grinned at the Asahi photographer as he used his mother’s desk when he studied.