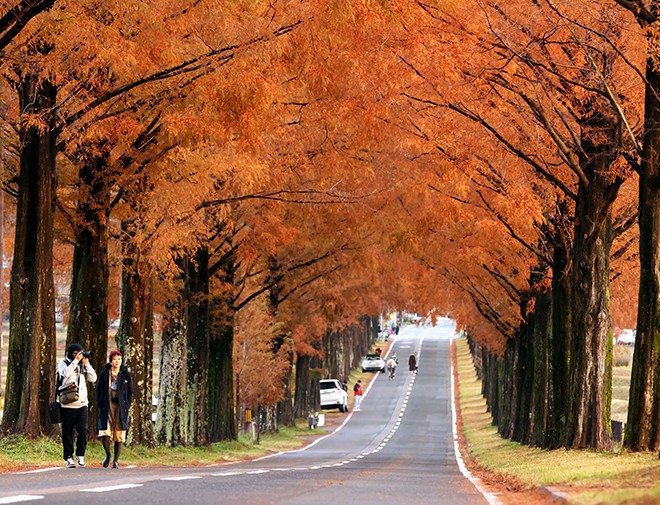 Two towering trees stretch their branches into the wintry sky in a corner of the National Museum of Nature and Science in Tokyo’s Ueno district.

The metasequoia, also known as “a living fossil,” was named 80 years ago by botanist Shigeru Miki (1901-1974), who taught at Kyoto Imperial University, present-day Kyoto University.

While analyzing numerous plant fossils, Miki came across an unidentified deciduous tree among those thought to be evergreen sequoia.

He published his discovery, naming it metasequoia. The prefix “meta” means “after” or “beyond” in Greek.

That was in 1941, the year Japan entered the Pacific War.

I went to the museum to see a special exhibition titled “Metasequoia: A Living Fossil.”

On display was Miki’s favorite backpack, which he used to haul fossils embedded in mud that he collected from various places including Gifu and Wakayama prefectures.

“He was once stopped by police, who suspected he was dealing in black-market rice,” said Atsushi Yabe, 50, the museum’s chief researcher.

In academic circles back then, metasequoia was believed to be extinct. But five years after Miki’s paper was published, the existence of a live metasequoia was confirmed in the Chinese hinterland.

The plant was locally called “shuishan.” An American botanist who received its seeds gifted Japan with 100 seedlings.

Collaboration among Japanese, Chinese and U.S. researchers continued to bear fruit through the chaos of the wartime and postwar years.

The high school I went to in Aichi Prefecture had a metasequoia, which rose over the four-story school building.

On my first day at school, my heart soared at the sight of its brilliant green leaves. On autumn days, the eye-catching brown of the leaves gave a sense of dignity.

The trees at the Ueno museum were still in their leafless “winter attire.”

They reminded me of serene philosophers, and I wondered if they, too, are descendants of the one tree that was “rediscovered” deep in the Chinese hinterland.