Japan ramps up cooperation with Europe to curb China at sea 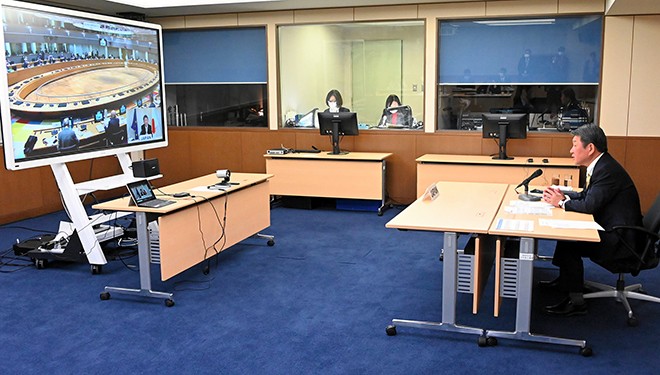 Japan is strengthening cooperation with various European nations to work toward a free and open Indo-Pacific (FOIP) region to counter various maritime moves being made by China.

At a news conference on March 2, Foreign Minister Toshimitsu Motegi said he welcomed "the patrol and surveillance activities being undertaken by France now in waters near Japan.”

A French frigate has been keeping an eye on North Korean ships secretly taking on cargo at sea since February. While those activities are based on U.N. Security Council sanctions, member nations are not obligated to carry out such activities.

Germany has also decided to dispatch a frigate of its own before the end of the year to the Indo-Pacific region to engage in similar monitoring.

“The moves are expressions of Europe's increasing interest in the Indo-Pacific region," a government source said.

Because it has territorial possessions in the Pacific, France in 2018 compiled a policy directive regarding the Indo-Pacific region. The Netherlands and Germany followed suit in 2020.

The EU has also begun discussions toward compiling its own directive and Motegi in January became the first Japanese foreign minister invited to participate in discussions at an EU Foreign Affairs Council meeting.

During that video conference, Motegi said, “Challenges exist to national security and democracy in the Indo-Pacific region.” He clearly had China in mind when he made the comment.

He went on to explain the FOIP concept and how Japan intended to further cooperate with other nations that share common values. A number of EU foreign ministers expressed their support for Motegi’s effort.

That reflects a steady change in how Europe views China.

Japanese diplomats have used every opportunity possible at international conferences to point out that what was occurring in the East China Sea and South China Sea was not simply an isolated regional matter but constituted a threat to the rule of law for all nations, according to a Foreign Ministry source.

The growing competition for hegemony between the United States and China has contributed to a growing sense of crisis in Europe over the past few years about China regarding national security and advanced technology.

Adding to that sense of distrust has been Beijing’s efforts to curry diplomatic favor by distributing face masks around the world amid the novel coronavirus pandemic as well as various human rights concerns, such as the stricter state security law targeting Hong Kong.

Motegi has also been traveling to European nations to make his case about FOIP. Between August and October 2020, he visited Britain, Portugal and France.

The Biden administration's clear stance of the importance of repairing U.S. ties with Europe as well as working together with allies in dealing with China has provided further momentum for Japan’s efforts.

One sticking point with Japan, however, is the emphasis many European nations place on human rights. That position could lead to those nations calling on Japan to take a stronger stance against human rights abuses by China.

“There will be a need to gain understanding for how Japan advances its own human rights diplomacy,” one government source said.