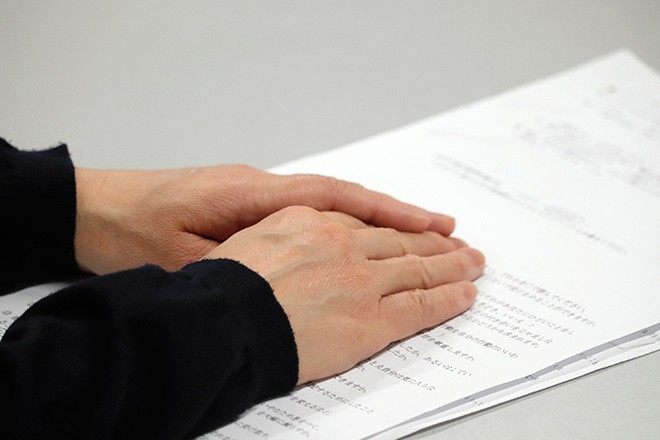 A victim of domestic violence by her husband talks about her experience in 2019. (Asahi Shimbun file photo)

For the 17th consecutive year, the number of consultations on domestic violence involving partners or spouses set a record, edging up to 82,643 in 2020, the National Police Agency reported on March 4.

However, it is not clear if more couples being forced to stay at home during the coronavirus pandemic contributed to the rise.

Instead, a key factor behind the continued increase in cases is growing awareness of domestic violence that has spurred victims to contact police or support groups, according to the NPA.

The total consultations represented a rise of 0.5 percent from 2019. The NPA said 76.4 percent of the victims were women.

But cases in which men were the target of violence are increasing, totaling 19,478 in 2020, nearly twofold the number five years ago.

By age, 27 percent of the victims were in their 30s, followed by 23.4 percent in their 20s and 22.9 percent in their 40s. Of the total cases, police accused 76 assailants of violating the anti-domestic violence law, up five from the previous year.

There were 110 attempted murders. In one case, an 80-year-old man in Fukuoka Prefecture used violence against his wife in her 70s, causing her injuries resulting in death.

Nearly 90 percent of the victims were women. Half of their stalkers were partners or former partners or husbands or former husbands. The number of cases in which assailants were accused of being in violation of the anti-stalking control law stood at 985, a new high.

The number of cases police made accusations under the criminal law or other laws came to 1,518. Among these were intrusions into another person’s residence, intimidation and assault.

One case involved a man who fatally stabbed a woman after she complained to police about being stalked by him in Utsunomiya, Tochigi Prefecture.

The NPA said a record 1,543 warnings were issued to people to stop stalking in 2020.