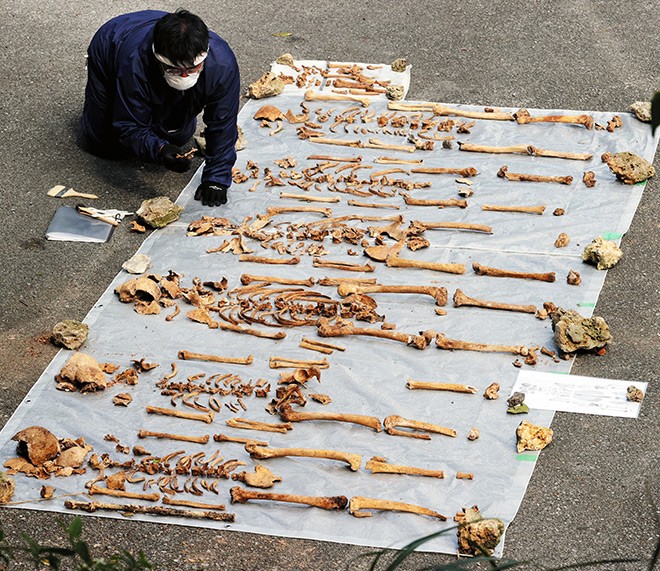 Human bones discovered inside a cave in Itoman, Okinawa Prefecture, are shown on March 3. (Minako Yoshimoto)

ITOMAN, Okinawa Prefecture—A search of a cave here uncovered the bones of six adults and two children who likely died during the 1945 Battle of Okinawa.

The bones were collected in late February and March by Mirai-o-tsumugu-borantia, a group of volunteers who search for remains and articles of the war dead.

The group said the remains were found in space surrounded by trash and rocks about 20 meters into the cave. The bones were buried about 1.2 meters deep over an area 2 meters long and 1 meter wide.

Based on the shoes and equipment discovered around the remains, the group believes the adults were Japanese soldiers. A fountain pen with the name “Nakagawa” engraved on it as well as buttons that appear to have belonged to American soldiers were also found there.

“In the past seven to eight years, the remains of one to three people are typically found at a single location,” an Okinawa prefectural official said. “Finding more than five remains is unusual.”

The Battle of Okinawa was one of the bloodiest in World War II. An estimated 200,000 Japanese and Americans died in the battle, including one-quarter of Okinawa’s civilian population.

One of the Imperial Japanese Army’s infantry regiments was involved in a fierce fight in the area around the cave. Many in the unit were originally from Hokkaido.

According to the Okinawa prefectural government, the provisional number of collected bones of the war dead in fiscal 2019 was 59, of which 38 were found in Itoman.

Mirai-o-tsumugu-borantia, based in Aomori Prefecture, carefully excavated the bones by hand and will clean them and deliver them to the prefectural government’s center in Itoman that collects remains of the war dead.

The group plans to request DNA testing on the remains for identification purposes and hopes to return them to their families.

Tetsuji Hamada, secretary-general of the group, said the health ministry has conducted DNA testing on bones previously found by the group, but it took more than a year after the moment of discovery to have a sample taken from the remains.

“Bereaved families are aging,” he said. “If the process had been done much quicker, close relatives might have still been alive and more accurate testing could have been conducted.”

Residents in Okinawa Prefecture have recently voiced concerns that undiscovered remains from the ferocious Battle of Okinawa might be mixed with soil used as landfill for a project to build a new U.S. military base off the coastal Henoko district of Nago.

Hamada said the group is determined to continue its activities to collect the war dead remains and return them to the bereaved families.