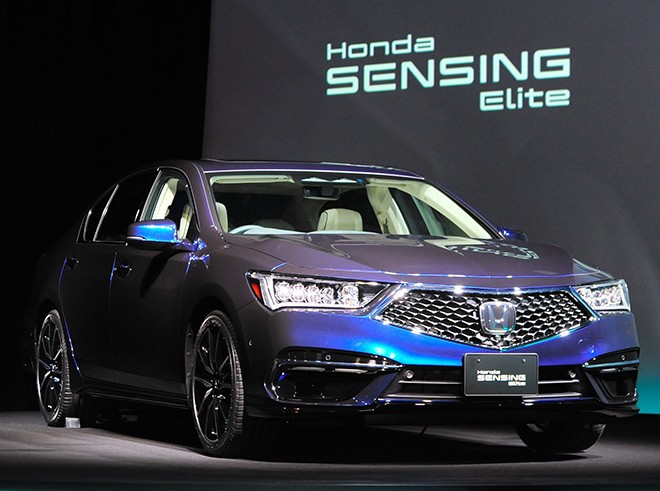 Honda Motor Co. unveils its luxury sedan Legend, which is equipped with an automated driving system graded at a level 3, on March 4. (Kazutaka Kamizawa)

Drivers who check their smartphones can now safely do so under certain driving conditions in the new Honda Motor Co. luxury sedan Legend, which was rolled out on March 5.

The Legend's semi-autonomous driving system is rated at a level 3 on the five-level scale for self-driving technology, the first such practical application introduced to the market in the world.

Drivers can utilize the automated driving function when expressways are congested and driving speeds are reduced to 50 kph or less. The automated system will guide all the driving operations.

Drivers can detach their hands from the steering wheel and operate the car's navigation system or check their smartphones but must be able to retake control of the vehicle if the situation dictates.

These special sensors collect complete information on the shapes of objects in the vicinity of the car.

The system can ascertain the vehicle's location and surroundings in detail while using those devices as well as highly accurate 3D-mapping data and information provided by the quasi-zenith satellites system Michibiki, allowing it to achieve the level 3 designation.

In Japan, the revised road traffic law went into effect last April, allowing autonomous vehicles rated at a level 3 to run on public roads ahead of other countries around the world. Honda passed the screening certification for the designation last November.