Doubling up on masks not much better at halting droplets’ escape 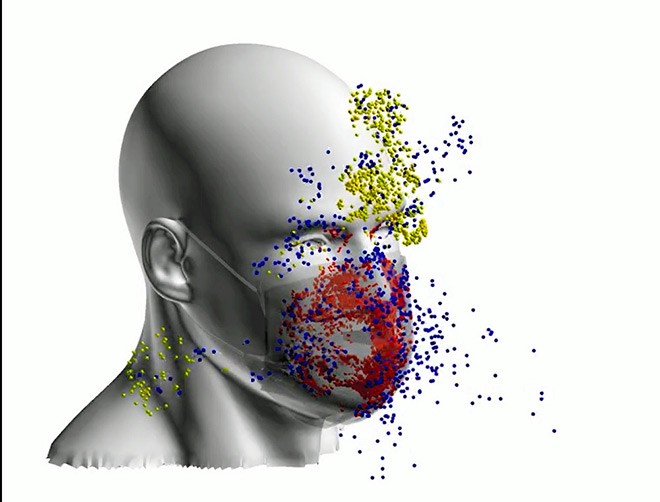 A simulation by the supercomputer Fugaku shows how droplets from coughing spread when a person is wearing a urethane mask over a nonwoven mask. Filters of the masks catch red droplets, while blue droplets pass through the filters and yellow droplets escape through a gap between the fabric and the face. (Provided by Riken Center for Computational Science, Toyohashi University of Technology and Tokyo Institute of Technology. Supported by Kyoto Institute of Technology, Osaka University and Daio Paper Corp.)

Wearing two face masks is only slightly better at stopping droplets from a cough from escaping than properly wearing one mask, a simulation by the world’s fastest supercomputer showed.

Eighty-nine percent of droplets are stopped if one wears a urethane mask over a nonwoven mask and leaves a gap between the fabric and the face, according to the results of the simulation released on March 4.

Still, 85 percent are stopped even with a single mask as long as the wearer tightly fits the fabric to the face by adjusting the nose wire.

A team led by the Riken Center for Computational Science used Japan’s supercomputer Fugaku to simulate the spread of droplets from coughs when a person is wearing one face mask over another as part of its research into measures against the novel coronavirus.

“Wearing two masks does not make them twice as effective but only slightly more so,” said Makoto Tsubokura, a professor of computational science at Kobe University, who heads the team. “Wearing one nonwoven mask is enough, and make sure it is put on properly without leaving a gap between the fabric and the nose.”

In the simulation, the team used data from a separate study into the filter performance of face masks made of different materials.

It found that one nonwoven mask traps 69 percent of droplets from a cough when worn without adjusting the nose wire to fit the fabric to the face. The figure improves to 81 percent when the nose wire is adjusted, but some gap is still left between the fabric and the face.

When wearing two masks, fewer droplets from coughs pass through filters, but they are more likely to escape through a gap between the fabric and the face, the findings showed.