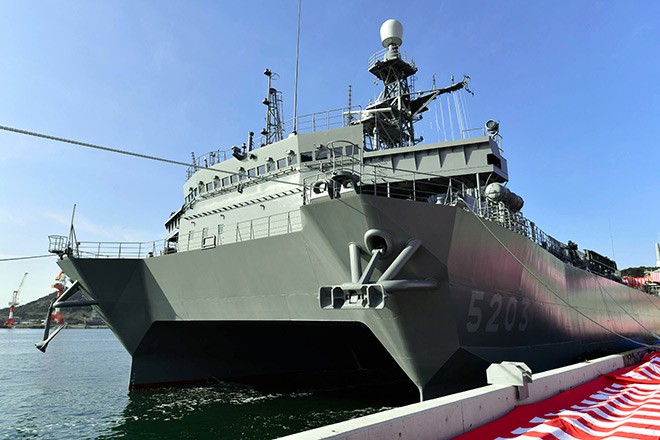 The Aki, the third and newest ocean surveillance ship of the Maritime Self-Defense Force, is commissioned in Tamano, Okayama Prefecture, on March 4. (Provided by the Maritime Staff Office)

For the first time in nearly 30 years, Japan's Maritime Self-Defense Force has added a new ocean surveillance ship, which will monitor the seas for intrusions of Chinese submarines.

The MSDF commissioned the Aki, the third such vessel in its fleet, on March 4 and deployed it to its Kure base in Hiroshima Prefecture. A ceremony to mark the commissioning was held at a shipyard in Tamano, Okayama Prefecture, that day.

Japan aims to increase its vigilance as China continues its military expansion and its submarines pass close to Japanese territorial waters.

“We will add to our ears,” said a source associated with the vessel's launch.

About 40 crew members will be aboard. The ship will collect sounds of water screws and generators emitted by foreign submarines through the sonar equipment Surveillance Towed Array Sensor System (SURTASS).

Two other ships in its class, the Hibiki and the Harima, were deployed in 1991 and 1992, respectively. They were planned and designed with the former Soviet Union’s submarine fleet in mind during the Cold War.

Since then, the MSDF has maintained its two-ship surveillance system.

“We will adopt a three-ship system as there has been a need for more eyes, or sensors, over the recent situation,” said MSDF Chief of Staff Hiroshi Yamamura.

According to the defense white paper, the Chinese military possesses about 70 submarines. It continues to build a new type of submarine that excels in its silent running capabilities.

In January 2018, a Chinese submarine was confirmed for the first time to have traveled through the waters off the uninhabited Senkaku Islands, which are under the jurisdiction of Okinawa Prefecture, but are also claimed by China.

Last June, a submarine believed to be Chinese was confirmed to have passed through the contiguous zone off Amami-Oshima island in Kagoshima Prefecture, according to an announcement by the Defense Ministry.

“It is very important for us to remain aware of how and where Chinese submarines are traveling through,” a government-related official said.