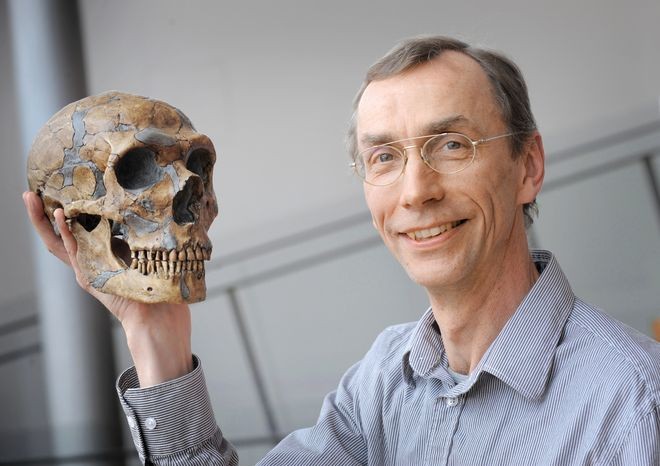 Svante Paabo, who also serves as a department head at the Max Planck Institute for Evolutionary Anthropology in Germany (Photo taken by Frank Vinken and provided by the Okinawa Institute of Science and Technology Graduate University)

ONNA, Okinawa Prefecture--New research suggests a gene that reduces the risk of developing serious COVID-19 symptoms is inherited from Neanderthals, a species of human that died out 40,000 years ago.

Researchers headed by Svante Paabo, a human evolutionary genomics professor at the Okinawa Institute of Science and Technology Graduate University here, found that 30 percent of Japanese as well as roughly half the population of the Eurasian land mass today have the characteristic.

“People marked by the specific genetic type appear to be able to more efficiently destroy viruses invading cells, such as the novel coronavirus,” said Paabo, adding that the genetic feature is believed to reduce the risk of COVID-19 progression by about 20 percent.

Paabo and his team members studied a gene known as OAS on the 12th chromosome in all 46 chromosomes, or 23 pairs, found in each human cell. The gene is associated with the production of a particular enzyme.

It is one of the genes that are suspected to be linked to COVID-19 symptoms by a different research team based on its analysis of 2,000 novel coronavirus patients in a serious condition.

The genetic feature connected to the gene was identified in Neanderthal remains uncovered in Croatia and southern Siberia, though ancient people in Africa, considered the cradle of mankind, did not have the factor.

As modern humans are thought to have crossbred with Neanderthals 60,000 years ago, Paabo's research suggests the trait was transmitted to people around that time.

Last year, Paabo’s team discovered a different genetic type that also derives from Neanderthals but works in the opposite way to that of the factor explained in the latest finding and triggers a higher risk of severe COVID-19 progression.

The risk factor for progression was found in areas of Europe and South Asia, but few patients in Japan and other parts of East Asia were found to have the characteristic.

For that reason, the genetic feature is presumed to at least partially explain the relative paucity of people with COVID-19 in East Asia developing severe conditions.