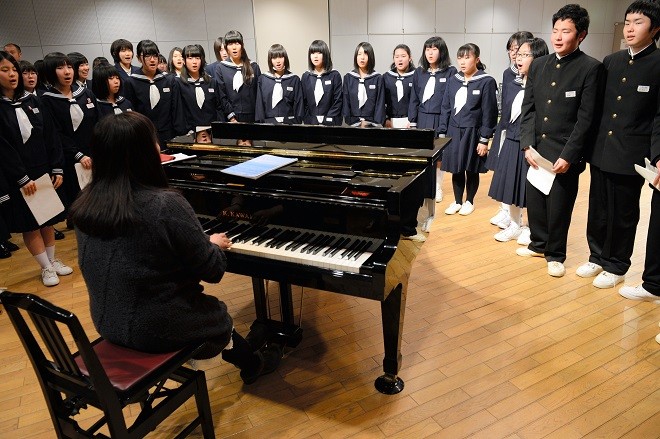 Are you familiar with a song titled “Gunjo” (Ultramarine blue)?

Sung at schools around Japan in recent years during the annual graduation season, it originated at Odaka Junior High School in Minami-Soma, Fukushima Prefecture, where the tsunami and nuclear disaster triggered by the Great East Japan Earthquake of March 2011 forced the student body to scatter all over the nation.

The lyrics were strung together from the students' casual conversations.

One verse goes: “'See you later,' I wave to my friend/ But will I see you again?/ I still remember your smiling face receding into the distance.”

Local residents are proud of how this song has spread nationwide. Hideo Tomita, 69, is one of them.

He was forced to live in Hokkaido for years as an evacuee. But when the evacuation order was finally lifted, he invited his 45-year-old son, Yusuke, who was working for a company in Hokkaido, to return to Odaka with him and start a farm together.

The nuclear disaster reduced the population of Odaka to one-third of what it was before the quake.

There was no way of stopping the ownerless rice paddies and crop fields from going barren.

“All our rice harvests have been examined and confirmed safe for consumption, but we are still having trouble regaining people's trust,” lamented Yusuke. “I was sorely reminded of the gap between safety and peace of mind.”

His father chimed in, “We want to reintroduce Odaka's tasty rice to the nation, and our Gunjo-mai is the first step.”

After interviewing the Tomitas, I headed to the coast, where reconstruction work was in full swing with cranes and trucks coming and going nonstop.

Ten years can bring many changes, as the saying goes. But the ravages of the tsunami could not be erased.

Gazing closely at the sea, the water offshore was ultramarine blue, forming a sharp contrast with white birds in the sky and a black cargo ship.

I prayed that people will once again be able to look at the ultramarine sea with contentment.