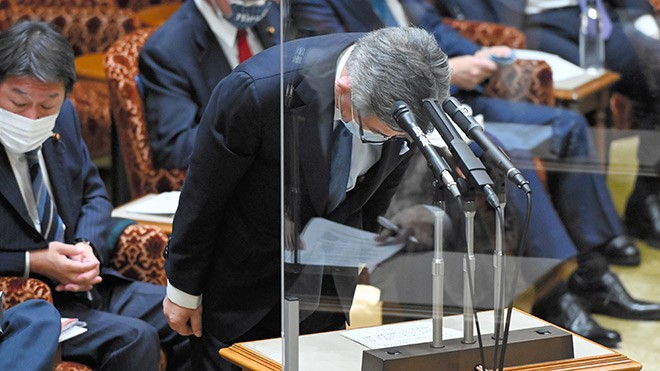 A satellite broadcasting company at the center of a wining and dining scandal with political implications should have had its license revoked as soon as a deviation in its shareholding structure came to light, but the telecommunications ministry inexplicably failed to take any action.

Tohokushinsha Film Corp. is suspected of having violated the Broadcasting Law after it gained ministry approval to start ultra-high definition 4K resolution satellite broadcasting by allowing foreign individuals and companies to holding more than a 20 percent stake in shares of the company, thereby giving them voting rights.

Under the law, the telecommunications ministry should have immediately retracted the approval, but it did nothing.

Opposition lawmakers are now seeking to clarify if that inaction was due not only to the extensive wining and dining of telecommunications ministry bureaucrats by Tohokushinsha executives, but also because the eldest son of Prime Minister Yoshihide Suga works for the satellite broadcaster.

“There is a strong possibility that (Tohokushinsha) violated the regulation regarding foreign shareholders,” telecommunications minister Ryota Takeda said in response to questions from Hiroyuki Konishi of the opposition Constitutional Democratic Party of Japan at the March 5 Upper House Budget Committee.

Limiting shares held by foreign individuals or companies to a 20-percent stake is intended to protect the interests of those watching the broadcasts in view of their high public impact.

Tohokushinsha submitted an application in October 2016 for 4K resolution satellite broadcasting, according to the telecommunications ministry. As of the end of September 2016, 19.96 percent of the company’s shares were held by foreign interests.

The company gained approval in January 2017, but in its March 2017 financial report, the company listed the ratio of foreign share ownership at 21.23 percent.

However, ministry officials did not disqualify Tohokushinsha from its earlier approval.

In October 2017, Tohokushinsha gained approval for its wholly-owned subsidiary, Tohokushinsha Media Service, to succeed the parent company as operator of the 4K resolution service.

It later emerged that the highest ranking telecommunications ministry official who approved the handing over of operations was Makiko Yamada, then director-general of the Information and Communications Bureau. Yamada this week resigned as Cabinet public relations secretary following revelations she was treated to a lavish dinner by Tohokushinsha officials that cost about 74,000 yen ($680) per head, putting her afoul of government guidelines on being entertained.

When the CDP's Konishi asked if the handing over of operations to a subsidiary was strictly legal and not a reason for the license to be invalidated, telecommunications ministry officials could only say that such a situation had never been envisioned and there was now a need to revise legal provisions.

Konishi also asked Takeda if the decision not to retract approval was because Suga’s son works for Tohokushinsha.

“We have not confirmed such a fact,” Takeda replied.

Hiroshi Yoshida, the current director-general of the Information and Communications Bureau, said in response to Diet questioning, “We checked with the officials who handled the matter at the time and they said they never thought there had ever been any violation of the law.”

Tohokushinsha officials refused to answer questions on grounds it was being investigated by the ministry.

Quite why ministry officials did not take action remains puzzling because anyone looking over Tohokushinsha’s financial records would have been aware of the foreign share ownership ratio.

Regulations related to the Broadcasting Law also obligate companies to report to the ministry whenever the ratio exceeds 20 percent, but ministry officials only said they were now trying to ascertain if they had received such notification from Tohokushinsha.

Rival companies were aghast that Tohokushinsha officials never checked its foreign share ownership ratios. The Asahi Shimbun checked the financial records of the other companies that also gained approval for 4K resolution satellite broadcasting in January 2017 and did not find a single one with a ratio in excess of 20 percent.

“It goes without saying that the ratio is checked periodically, so I cannot understand how Tohokushinsha allowed that to happen,” commented an executive of a company that gained approval at that time.