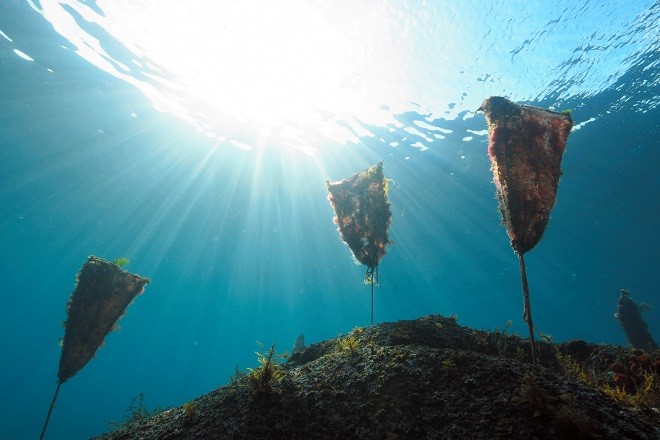 Hiroshi Sato is working to regenerate a kelp forest off a beach beside the Namiita fishing port in Ofunato, Iwate Prefecture, on Jan. 21. (Ryo Kato)

OFUNATO, Iwate Prefecture—Once belittled for his post-tsunami efforts and even mistaken for a swindler, Hiroshi Sato is the go-to person here for fishermen having problems with their aquaculture farms.

Sato, operator of a diving equipment shop in this northeastern city, has been instrumental in efforts to revive underwater ecosystems that were devastated by the disaster on March 11, 2011, but problems continue.

“The scallops just won’t come up,” the fishermen tell him, for example. “Perhaps something is stuck down there. Could you take a dive and look?”

When Sato dives to the troubled area, he typically finds an entanglement of various objects carried away by the tsunami, such as ropes, nets and other fishing gear. He said he has also come across a sunken vessel and a corroded automobile.

Although 10 years have passed since the Great East Japan Earthquake and tsunami, the fishermen’s requests to Sato still come at least once a month. Meanwhile, he has expanded his activities to bring sustainability to the maritime industry.

UNSURE ABOUT RETURNING TO JAPAN

Sato, a 46-year-old native of Hanamaki, Iwate Prefecture, was working as a diving instructor in the southern Thai resort of Khao Lak when the quake and tsunami hit northeastern Japan. He was aboard a cruise ship in the Andaman Sea when he was told about the disaster.

Although he feared for the safety of his relatives who lived along the tsunami-hit Sanriku coast, Sato thought he would be of little help even if he were to get back to Japan.

Unable to decide what to do, Sato returned to a port where his colleagues were waiting with loads of supplies and even an air ticket to Japan.

“You should take all this with you and go back to Japan, no matter what,” Sato was told.
The relief goods included underwear, sanitary napkins, instant food items and cell batteries.

His local colleagues had experienced the Sumatra earthquake and Indian Ocean tsunami of 2004 and understood what was needed to survive and rebuild.

Sato arrived in Japan carrying as many relief goods as possible on his sturdy 180-centimeter frame.

After reaching the Sanriku coast four days after the disaster, he found the once-beautiful ocean was covered with drifting rubble and littered with all sorts of sunken objects, such as automobiles, houses and vending machines.

He said he pledged to himself that he would help restore the pristine beauty of the ocean.

Divers across Japan entrusted Sato with their own relief goods. He loaded the supplies into his car and spent about three weeks distributing them to people he knew along the coast.

In April 2011, Sato began working with fellow divers to clean the ocean floor and study the state of underwater rubble. He made the rounds of ports, in the style of unannounced sales calls, to ask if he could help with anything.

Leisure diving is not a widespread practice in the area, so divers are often assumed to be poachers.

“A suntanned man with a large build came smiling up to me,” Shogo Oikawa, a 49-year-old fisherman in Ofunato, said of the time when he first met Sato. “I went on the alert because I thought he could be a con man.”

Day after day, Sato dove into the sea to wrap ropes around various items and worked with fishermen to salvage them. For three years, he continued his daily, down-to-earth efforts to build ties with local people.

After the underwater rubble had largely been cleared and fishing operations resumed, there was still much talk at ports about poor catches of sea urchins and abalones.

The abalone population plummeted because the tsunami had destroyed their food, seaweed, on the ocean bed.

There were also cases of “barren grounds” caused by an outbreak of sea urchins overgrazing on sprouting seaweed, rendering rock surfaces white all over.

Sato began working to help restore kelp and seaweed forests, which offer shelter to fish, with the goal of regenerating coastal ecosystems.

He installed around 100 bags of Japanese kelp spores on rocky tracts and planted eelgrass, a seaweed species, on sandy tracts along Namiita beach in Ofunato.

Fishermen initially made light of Sato, saying his efforts were good for nothing.

But they began to praise him when sea urchins had grown fleshier in the areas where he had taken his measures.

He also serves as an instructor of practical marine training for senior high schools along the Sanriku coast.

During Sato’s efforts in the Tohoku region, deep smile lines have formed around the corners of his eyes.

“I cannot tell how long I can still continue to dive,” Sato said. “I hope to develop what I would call ‘marine activists,’ who are willing to cultivate the ocean of their native place.”