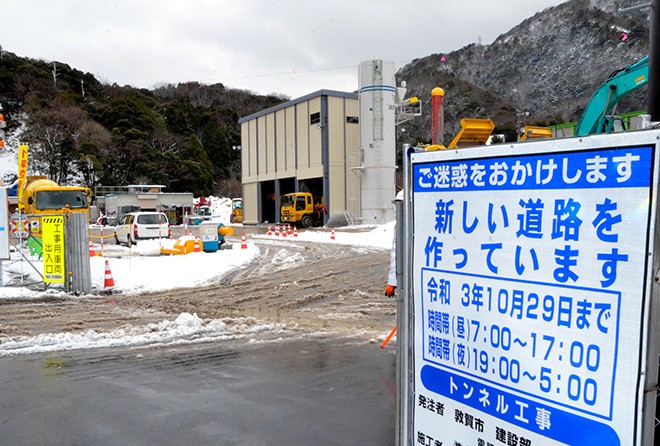 TSURUGA, Fukui Prefecture—Multibillion-yen road projects continue on a peninsula here, funded in part by a nuclear power company that has gained no income from electricity for a decade.

The roads were planned decades ago for the expected expansion of the Tsuruga Nuclear Power Plant here. Although all nuclear operations and construction at the nuclear plant have long been halted, the work on the roads has not stopped.

“We are building a new road,” said a signboard near an area where heavy vehicles were removing dirt from the site of a planned tunnel in the city of Tsuruga, Fukui Prefecture, in mid-February.

The sign included an apology for causing an inconvenience to motorists.

The city roads being built are Nishiura Route No. 1 and No. 2 on the sparsely populated eastern side of a peninsula that juts out into the Sea of Japan separating Wakasa and Tsuruga bays.

JAPC owns three nuclear reactors, including two at the Tsuruga Nuclear Power Plant. But all three reactors have been shut down since the 2011 Fukushima disaster, meaning that JAPC has had zero income from electric power generation for a decade.

The neighboring town of Mihama hosts the KEPCO-run Mihama Nuclear Power Plant, which has also been shut down since 2011.

So where does JAPC’s money for the roads come from?

Some experts are concerned that JAPC’s continued generous aid for road construction could affect the electricity rates charged by the five utilities.

The plans to build the two city roads were hatched around 1993, when the Fukui prefectural assembly passed a resolution to build the No. 3 and No. 4 reactors at the Tsuruga plant.

The work was expected to increase traffic of large vehicles into the peninsula.

In addition, many residents on the peninsula wanted a bypass from a prefectural road.

“The roads will be helpful if they are completed,” a 74-year-old resident who manages an inn in the area said.

JAPC started donating money for the projects in 2009, when the Fukui prefectural government approved the completion of land preparation work for the company to build the No. 3 and No. 4 reactors.

From fiscal 2009 to fiscal 2013, JAPC “donated” a total of 1.98 billion yen to the city for the road projects. The money was listed in the city’s financial documents, which were made available to the Tsuruga city assembly.

But since then, JAPC has paid “construction contributions” to Tsuruga city under the Road Law, which does not require the listing of names of the financial sources or the amount of the funds.

JAPC and KEPCO gave Tsuruga a total 197 million yen in construction contributions in fiscal 2018 and fiscal 2019, sources close to the city said.

In fiscal 2020, the companies are expected to pay a total of 370 million yen.

And in its fiscal 2021 initial budget plan, the city has included 940 million yen from the two companies.

By fiscal 2021, JAPC and KEPCO will have provided 4.06 billion yen to the city for the road construction.

After fiscal 2022, the city government said it will tell the companies how much they should pay “from fiscal year to fiscal year.”

JAPC shoulders 58 percent of the costs, while KEPCO pays 42 percent. The ratio “was decided by the business operators,” and the city government “does not know how it was decided,” an official said.

After its reactors were shut down and its business conditions deteriorated, JAPC was criticized for providing such generous donations to Tsuruga.

JAPC in 2013 demanded that the city not list its donations in the financial document, and the payments were not recorded in fiscal 2012 and fiscal 2013, the sources said.

In fiscal 2014, JAPC paid a construction contribution of 570 million yen. At the same time, the company told the city that it would stop providing money. The road construction was halted for three years.

JAPC runs the No. 1 and No. 2 reactors at the Tsuruga plant and the Tokai No. 2 reactor in Tokai, Ibaraki Prefecture.

Tsuruga’s No. 1 reactor is scheduled to be decommissioned, while the No. 2 reactor has suspended operations since May 2011. In 2012, experts pointed out the possibility that an active fault line runs under the No. 2 reactor.

The Tokai No. 2 reactor was built more than 40 years ago. JAPC has no clear plan to resume operations of the aging reactor.

Construction of No. 3 and No. 4 reactors at the Tsuruga plant has been also halted.

JAPC’s Tsuruga Plant operational headquarters told The Asahi Shimbun that it “has cooperated with the city as part of measures to help develop the area.”

But the headquarters declined to comment on the amount it has paid to the city for the roads.

KEPCO’s public relations office said the company “will be actively involved in” the city’s road construction projects, but declined to reveal the amount it has provided.

As of the end of January this year, there were 520 people living in the peninsula registered as residents of Tsuruga. The peninsula has hosted seven nuclear reactors, of which five have been under decommissioning work.

The planned city-owned Nishiura Route No. 2 will be 800 meters long. The construction site is located north of the center of the Tsuruga city.

The estimated cost to build this road is 1.46 billion yen.

A former Fukui prefectural official who was familiar with the deal-making process said JAPC offered the money “as a quid pro quo for the city’s acceptance of the nuclear plant’s expansion plan.”

The innkeeper who wanted the roads in the area also noted that times have changed since the start of construction.

“The traffic of vehicles related to nuclear power plants has drastically decreased compared to the times before the Fukushima accident,” the innkeeper said. “I don’t know if the roads are really needed.”